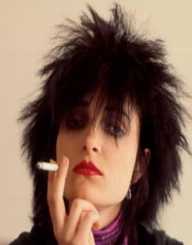 Siouxsie Sioux was born on May 27th, in 1957. She earned her fame for being the lead singer of the rock band called Siouxsie and the Banshees. Some of the hit songs that brought her to the limelight include “Kiss Them For Me” and “Happy House.”

Susan Janet Ballion alias Siouxsie Sioux was born on May 27th, in 1957. Her birthplace was in Kent, England. Her parents crossed paths while they were working together in Belgian Congo.

Her mother worked as a secretary whereas her father was a bacteriologist. When Sioux was 14, her father passed away as a result of liver cirrhosis that he was suffering from. This disease was greatly attributed to the fact that her father was an alcoholic.

Right from a tender age, Sioux argues out that she was lonely as she grew up. This was contributed by the fact that her mother had to leave her alone most of the time to go and work.

Siouxsie and the Banshees

Siouxsie Sioux began taking trips to England in 1977. During this time, she traveled around with her band dubbed Siouxsie and the Banshees. The following year, they released their first single called “Hong Kong Garden.” This song performed well as it was ranked number 7 in the UK charts.

With time, the group released their debut album The Scream. The album was unique in its own way and that it went along to receive 5- star reviews in Record Mirror and Sounds.

Afterward, in 1979, they released Join Hands as their second album. This was slightly different from the first as it was based on a war lyrical theme.

Later, John McGeoch joined the band and had a huge influence on the new style of music that the group adopted. This was evidenced by the Kaleidoscope album released in 1980. This album garnered Sioux high acclaim with hit singles such as “Happy House” and “Red Light.”

The group did not stop there, in 1981, they released Juju. The album performed well as it was ranked seventh on the charts. Hit singles within the album included “Arabian Knights” and “Spellbound.”

Still, in 1981, Siouxsie Sioux went ahead and brought together another band named The Creatures. Their debut album Feast came in 1983. One of the singles that rocked was “Miss the Girl.” Soon, they followed with another single called “Right Now.” The song was a hit and that it was ranked among the top 20 hits on the UK charts.

In May 1991, Siouxsie Sioux tied the knot with Peter Edward Clarke alias Budgie.