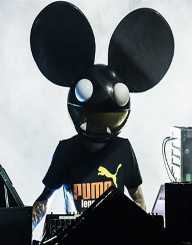 Joel Thomas Zimmerman was born on 5th of January  1981 in Niagara Falls, Ontario. His parents are Rodney “Rod” and Nancy, and he has older sister Jennifer and younger brother Chris.

Joel Thomas attended Westland Secondary School in Niagara Falls but did not further his education after.

Joel Thomas received a keyboard for Christmas when he was a teenager, but went on to disassemble it to see how it worked.

Before working as a DJ, Joel worked as a programmer, and in animation and web design for online music licensing company.

It was during this time that he became known as the “dead mouse guy” after reporting to his friends that a dead mouse was on his computer. He later on shortened it to leet term Deadmau5.

Joel Thomas began working with music as early as 1990 but released Project 56 in 2005. Project 56 was a compilation of fifty- six demo songs, featuring different genres like Ambient/ Downtempo, chiptune, and many more.

Following his rise to fame, Joel Thomas made a logo and helmet the mau5head. He created it when he was learning how to use the 3D modeling software.

Get Scraped was the first studio album debuted by Deadmous5, focusing on some of his old demo songs in 2006. He then produced a few more songs during that year. Joel started Mau5trap, his record label in 2007.

Deadmau5 worked with Ultra Records and Ministry of Sound to publish Random Album Title in 2008, collaborating with Kaskade, a San Francisco producer.

For Lack of a Better Name and 4x4=12 were albums that were released after 2009. Joel toured in North America and sold the recorded performances on flash drives. Following his popularity,

Deadmau5 included light shows and performance, rather than only performing in clubs.

To date, Deadmau5 has eight studio albums. Deadmau5 became a playable character in DJ Hero 2, with the game including tracks by him, such as Ghosts 'n' Stuff”. Joel is also a secret unlockable avatar as DeadGoa7 in Goat Simulator.

Deadmau5’s works appear in Dota 2, Grand Theft Auto and many more. Joel performed at Minecon, as he is a fan of Minecraft the video game.

Deadmau5 won three Juno Awards and other music awards. He was induced into the Arts & Culture Wall of Fame in Niagara Falls.

Joel Thomas dated Lindsey Evans, an American model after they met at the VMA awards. The couple broke up later in 2011. In 2012, he started dating Kan Von D, the tattoo artist and model.

The pair had an on again, off again relationship. Joel Thomas famously proposed to her on Twitter, but the pair ended their engagement in 2013.

Joel Thomas is active on social media and owns the website deadmau5.cmo, which is where he posts his new songs and updates since 2002.

Disney disputed his mau5head logo in 2012, citing that it looks too close to theirs. Joel Thomas hit back by saying Disney had used his songs without permission. In 2015, the dispute ended amicably.