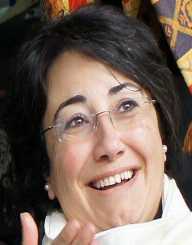 Haneen Zoabi was born on May 23, 1969. She is an Israeli politician. She is the first Arab female to represent in the Parliament of the state. She is also a controversial Arab law maker in the Israeli parliament. She started her career as a teacher before she decided to form her nongovernmental organization aimed at using media to promote intercultural dialogue and understanding. She later joined politics, and she became one of the few ethnic Arabs to be elected as a member of the Israeli Parliament.

Haneen Zoabi was born on May 23, 1969, in Nazareth, Israel. She was born into a Muslim family. She joined the University of Haifa and studied philosophy. In 1987, she graduated from the University with a Bachelor of Arts. In 1991, she earned her Masters of Arts in Communication from the Hebrew University of Jerusalem. She was the first ever Arab citizen of Israel to graduate in media studies.

Haneen Zoabi began her career as a Mathematics teacher. She also worked as a school inspector for the Israeli Ministry of Education. In 2001, she became a member of the Balad Party, and that is how she began her political career. In 2003, he assisted in establishing ‘I’Iam’ which is a nongovernmental organization that is known by the name Media Centre for Arab Palestinians in Israel. She later became the general director of the organization. In 2006, she ran for a seat in parliament, but she lost as her party did not receive enough votes to be awarded any seats in parliament. In 2009, she resigned as the general director of the nongovernmental organization. In the same year, she successfully ran for a seat in the parliament.

Haneen Zoabi became the first female member of Arab descent in the history of the Israeli parliament. She received national attention when she described the Prime Minister and some other leaders in Israel as ‘a bunch of fascists.’ In March the same year, she captured the attention of the media when she stated that she was not concerned that Iran would produce nuclear weapons. Israeli’s position on the matter is however opposed to what Haneen thinks.

In 2010, Haneen Zoabi participated in the Gaza Flotilla where she was arrested by commandos who boarded a ship that was approaching Israeli waters. After she was released, she addressed the press and called the raid ‘Pirate Military Operation.’ She was arrested with no injuries, but nine passengers were killed and over ten people injured in the attack. In the same year, while she was addressing the parliament Anastasia Michaeli, a fellow member of parliament went towards the podium and prevented her from speaking. She was later assigned security guards for her protection.

In 2012, the Foreign Ministry of the state had to change their rules after Haneen Zoabi was defamed by the media. In the same year, the Central Elections Committee as well as a select panel of judges from the Supreme Court met to agree whether or not to disqualify Haneen as well as her party from the 2013 elections. The Committee decided to disqualify her with 19-9 vote. The case was later taken to the Supreme Court, and the court voted to overturn the ban.

In 2013, a member of parliament submitted legislation to the parliament entitled ‘Zoabi Law.’ The legislation was brought forward to block the Supreme Court from meddling with decisions made by the Central Elections Committee. The legislation did not, however, pass a law. In 2014, three Israeli teenagers were kidnapped, but Haneen Zoabi stated that the kidnappers were not terrorists. In the same year the Attorney General opened a new investigation on Haneen, and four days later she was suspended from the parliament for six months. She appealed to the Supreme Court to overturn the suspension, but her appeal was rejected. In 2015, the High Court of Justice made a ruling in favour of Haneen reversing the decision to disqualify her from being eligible to run for office in the 2015 elections.

Haneen Zoabi has been an Arab Crusader since she joined politics in Israel. She has campaigned against polygamy. She and her party also support a one state solution for Israel. She is not married and currently lives with her parents.