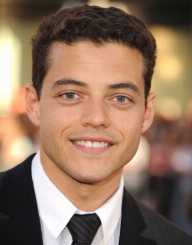 Actor Rami Malek was born on the 12 May 1981 in Los Angeles, California. He has an identical twin Sami as well as an older sister Yasmine. He is of Egyptian descent.

Rami Malek was a pupil at Notre Dame High School, Sherman Oaks, California (1999). After high school graduation, he enrolled at the University of Evansville and graduated with a BA in Fine Arts (2003).

One of Rami Malek's early roles was in the television series Gilmore Girls. He also appeared in two episodes of the television drama Over There and the comedy series That War at Home.

Rami Malek alma mater, the University of Evansville awarded him their Young Alumnus Award in 2017. The same year he became a member of the Academy of Motion Picture Arts and Sciences. He won a Primetime Emmy Award and a Critics Choice Television Award in 2016 for Mr. Robot.