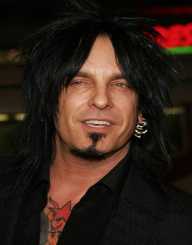 Nikki Sixx is the lead bassist as well as the founder of the Motley Cure which is known for crazy antics on stage. He made it to the top 100 of the most influential musicians of the day. He was known for kick-starting his career at a very early age of 17. Since then he had become one of the most admired bassists in the world of heavy metal music. He is known to have performed for various Los Angeles bands. Nikki Sixx later expanded to have his clothing line which he called Royal Underground. He got into the world of music and made waves by performing and working in so many works. Although he always dreamt of becoming a songwriter with his ultimate band Motley Crue.

Nikki Sixx was born on December 11, 1958. He was born to a single mother, Deana Richards as Frank Serafino Feranna. He was raised by his mother before he was raised by his grandparents after his mom left the family. Throughout his lifetime, he kept changing from place to place to live and survive. However, he became delinquent and got himself engaged in drugs. At the age of 17, he moved to Los Angeles where he worked as selling vacuums and chose to work in a liquor store. He changed his name to Nikki Sixx while learning how to play bass guitar. He later joined the group called Sister after being told to participate in a band.

His career was turbulent as Nikki Sixx got fired after recording a demo with the Sister band. He later formed his group London in 1978. He later formed the group London in 1978 with a band-mate that was fired alongside with him. However, he left the group in 1980 to form his band Motley Crue. This bandincludes the likes of Tommy Lee, Mick Mars, and Vince Neil. He later recorded his first album in 1981 and was released under the band’s record group. The album was titled Too Fast for Love. He got his widespread national fame with his album titled Shout at the Devil. Between 1985 and 1989, Nikki Sixx released some albums which include Theatre of Pain, Girls, Girls, Girls as well as the hit album Dr. Feelgood. His band did exceptionally well at this time but later got addicted to heroin. He had to visit rehabilitation sometimes.

In 1991, his band released a compilation of all their hit songs and regarded it as Decade of Decadence. A new self-titled album was also released with a new band member in 1996 before Nikki Sixx got fired. After releasing the Seventh Heavy metal album, the band feels it necessary to remix all their songs. They then compiled the remixes as New Tatoo. The next year saw a penned best-seller autobiography of Sixx, The Dirt. He formed Project58, an Internet-based alternative project. There, they released their debut as well as a single titled Diet for a New America and Peace of Candy. Here Come the Brides became a huge hit in 2004. The band, however, had a separation and were reunion later and went on tour with the original members.

In 2006, Nikki Sixx formed Sixx AM which is to handle the record of his autobiography supplement record, The Heroin A Year in the Life of a Shattered Rock Star. In 2008, the group released Saints of Los Angeles which happened to be their ninth record. He later launched a radio show Sixx Sense with Nikki Sixx, and this aired on all major rock stations. Years later, it was given a morning slot. He is also known to be the host of The Side Show with Nikki Sixx; this is show other than the radio show.

Nikki Sixx dated and lived with Lita Ford but had a turbulent relationship before dating Vanity. He documented everything in his album. He later got married to Brandi Brandt, a playboy playmate in 1989 but later separated in 1996. He had three children from the marriage. He got married again to another playboy playmate, Donna D’Erico and got separated and reconciled before divorcing finally in 2007. Soon, he entered into a relationship with Kat Von D between 2008 and 2010.