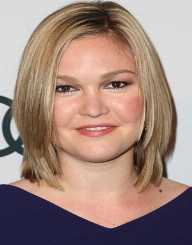 Julia Stiles is an American scriptwriter, film and stage actress, who started out at a tender age. She is best known for her role in a variety of youthful movies. With splendid performances, she has received praise and admiration from many, including Stephen Holden, who see her as an exciting prospect and claim she, is one of Hollywood’s creative upcoming actress. As an actress, she is widely recognized for her performances in movies, i.e., Save The Last Dance, 10 Things I Hate About You and Bourne Ultimatum.

Julia O’Hara Stiles was born on 28th March 1981 in New York City. Her parents are Judith Newcomb Stiles, who does pottery based in Greenwich Village and John O’Hara, a known second grade teacher and businessman. She is the first born to the couple, with two other siblings, namely Johnny and Jane. They are of English-Irish and Italian origin. They grew up in an apartment in Soho, New York, which was a massive industrial land that was partly abandoned.

Right from her early days, Julia Stiles was intelligent, bright and sharp looking, often looking out for opportunities to make herself useful. She could join in her parent's political discussions while they were having dinner. At the age of six, she was able to serve at her family business in Greenwich, serving and handling the register, and being very social with customers while at it. One of her parent's hobbies was watching plays at the theatre, and they often brought Julia with them. There, they watched different plays, but she was especially fascinated by the Shakespearean series, which made her want to be an actress someday.

As a kid, Julia Stiles often loved writing and would write letters to her parents whenever she needed something.  At eleven years in 1992, she wrote a letter to the mayor of New York City, who was Ed Koch at the time. She was concerned about the environmental conditions in the region and proposed that more dustbins be added in the streets. More so, she wrote another letter to `La Mama' Theatre Company. In the letter, Julia Stiles expressed her interest to be cast in a production, and within a few months, her message received a positive response. This was her first stage performance.

Julia was not straightforward with her academic education. However, she attended dance training with the intent of being an all-around entertainer. This happened at New York professional children school. Also, she taught herself to act, with the help of TV series `The Honeymooners.’

At the age of eleven, Julia Stiles started her acting career, courtesy of La Mama Theatre Company, after writing a letter of interest to them. From her early start, she was decided that this is what she wanted to do, and became consistent with it. The following year, she performed in a couple of plays, examples; `The Candle Box,’ `Mathew School Of Life’ among others, courtesy of company `Kitchen Theatre.’ In next to no time, she received opportunities to perform in commercials and received those with arms wide.

In the year 1993, Julia Stiles made the first appearance in television in series `Ghostwriter’. Her character was Erica Danby and lasted for six episodes. In 1996, her first film role came by, with the movie `I Love You, I Love You Not.’  More so, Julia had minor roles as Bridget O’Meara in film Devil’s Own during 1998 and Wide Awake in 1998. Shortly after, she earned a lead role in movie `Wicked.’ The role was of a young girl who allegedly killed her mother due to childhood psychological problems, with the intent of having her dad all to herself. Due to the movie, she received recognition and praise at the Sundance film festival, and best actress with Karlovy Vary international film.

However, in 1999, her real game changer came by in role Heath ledger in film, `10 Things I Hate About You’. The movie was a major hit and boosted her career to a whole new level. Due to her performances, Julia Stiles was awarded an MTV movie award and was the most promising actress of the year at the Chicago film critic’s polls.

In 2000, Julia Stiles featured in comedy film `Down To You,’ and due to her performances, specifically onscreen chemistry with actor Freddie Prince Jr, she won a Teen Choice award. At the time, she also appeared in her most loved Shakespearean adaptations, but the films did not enjoy major success due to a couple of hindrances. The next year, she had a role in the film `Save the Last Dance.’ The movie brought her relatively great commercial success. More so, she was awarded best kiss, the best female performance by MTV awards and best fight scene by Teen choice awards, due to her brawl with co-star Bianca Lawson during the movie.

At that time, Julia won the attention of Rolling stone who impressed by her performances, named her `The coolest coed’ and made her the cover face on their issue. During the same year, Julia Stiles was pretty active, making appearances in a couple of other movies, for example, State and Main and Stockyard Channing.

In the year 2001, a trickier role came by, as Julia Stiles played Paula Murphy in the film `The Business Of Strangers’. The role was pretty fascinating and won her a Satellite award for the best-supporting actress. Next, Julia’s career progressed with films `The Vagina Monologues', and a lead character as Viola in `Twelfth Night.’

Also, she featured in `The Bourne Identity’ as operative Nicky Parsons. The role was small but of great significance to the movie and was enlarged in subsequent versions of the movie, including The Bourne Supremacy and Bourne Ultimatum released in 2004 and 2007 respectively and has maintained their stature as her top films for long.

In between her roles in the Bourne series, Julia has also featured in various movies, for example, `Mona  Lisa Smile,’ `The Prince and Me,’ and `The Omen.’ In 2004, she had debut stage performance at the Garrick Theatre in London and also reprised the same role five years later at the Taper forum.

Julia Stiles has diversified into her films career, and in 2007, she took it further by making a debut in movie directing in the film  `Raving.’ Apart from directing, she also wrote its script. In 2010, she worked with TV series Dexter and due to her performances; she earned nominations from the Golden Globe Awards and Prime Emmy awards. During the same year, she featured in a TV series named Blue which is ongoing, and The Mindy project in 2014.

Was a presenter at 73rd academy awards shortly.

Did writing and directorial work in Elle magazine.

Julia Is often concerned with social and political issues. She worked for the `Habitat for Humanity and Amnesty International

Associated with `Amnesty International’ and helped create awareness of the condition of Juveniles who are faced with immigration incarceration.

Julia Stiles is a bachelor’s degree holder in English from Columbia University. While there, she received an honorary award for professional achievements. Being a former vegan, she was a vegetarian but was compelled to give up her vegetarian habits due to anemic disorders, and due to this, she had to opt for red meat. She is a renounced feminist and elaborated this factor during her piece in The Guardian. She is known to have interest in sports, with proclaimed love for basketball and soccer, whereby she is a fan of New York Red Bulls. Julia got engaged to Preston J Cook on January 3, 2016.