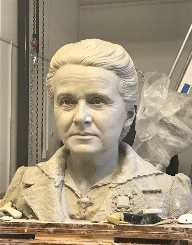 Millicent Fawcett was born in Aldeburgh, Suffolk, England, on June 11, 1847. Her parents were Louisa Dunnell and Newson Garrett. She also had several brothers and sisters. She later changed her last name to Fawcett after she was married. She is better known by her married name than by her maiden name.

As a child, Millicent Fawcett and her sister, Elizabeth, moved from their family home to attend a boarding school in London. Here, she had a great education. She focused on studying literature above all else.

Later, Elizabeth moved on to study medicine, but Millicent Fawcett did not. She visited her sister often. It was during these visits that she first became involved with the women’s rights movement of the late 1800’s to early 1900’s, which is often also called the first wave of feminism.

After finishing her education, Millicent Fawcett began working at the London Society for Women’s Suffrage as a secretary. He was also involved with other women’s rights groups at the same time. She would often attend women’s rights meetings, protests, and other public demonstrations.

In the 1870’s, Millicent Fawcett helped to found several buildings and organizations. In 1871, she helped to found Newnham College. Later on, she founded Newnham Hall. She would go on to serve on the hall’s council for several years.

In the mid-1880s, her husband died. Millicent Fawcett stopped working and giving speeches for months because of the depression that came from losing someone she loved. Once she was done mourning, she resumed work and continued to give speeches on women’s rights.

In the 1890’s, Millicent Fawcett became involved with the National Union of Women's Suffrage Societies (NUWSS). She began the president of this group in 1890. While in this group, she did not only focus on women’s rights, but also the rights of slaves and children in other countries.

During World War I, Millicent Fawcett and the other women involved with NUWSS donated their time to the war effort. Because of all of the work that NUWSS and other women put into the war, British women were granted the right to vote in 1918 (However, the voting age for women and men were not equal until 1928). In 1919, Millicent left the NUWSS.

After women earned the right to vote, Millicent Fawcett no longer needed to focus on suffrage, so she instead focused on some of the other issues women and children were facing at the time. She worked to end domestic abuse (for both wives and children), sexual abuse, child marriage, child prostitution, and the sex slave trade.

In the 1870’s, Millicent Fawcett devoted much of her time to writing. She continued to write into the 1920’s. Some of her most famous publications are listed below.

The Life of Her Majesty, Queen Victoria

Women's Suffrage: A Short History of a Great Movement

The Women’s Victory and After: Personal Reminiscences

What I Remember (Pioneers of the Women's Movement)

Millicent Fawcett was made a Dame when she earned the Grand Cross of the Order of the British Empire (1924).

She had an honorary degree from St. Andrew’s University.

Millicent Fawcett married Henry Fawcett in 1867. She then changed her last name to match his. The couple had one daughter together: Phillippa. Sadly, Henry died in 1884. Millicent did not remarry after his death.

Millicent Fawcett died on August 5, 1929, in London, England. She was 82 years old when she passed away.

Many buildings around England are named after her (mostly buildings dealing with women’s rights). Some of these buildings include the Fawcett Library and Millicent Fawcett Hall (at Westminster School).

A statue of her is planned to be erected in Parliament Square in London in 2018 to celebrate the 100 year anniversary of women having the right to vote.