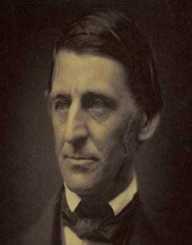 Ralph Waldo Emerson was born on May 25th, in 1803. He is best remembered for being an essayist, transcendentalist poet, and a philosopher. Emerson was perceived by many as an advocate of individualism.

His initial essays were at first written in the form of lectures. They were later revised and printed. His notable essays include "The Over-Soul," Self-Reliance," The Poet," “Experience” and “Circles.”

Ralph Waldo Emerson was born on May 25th, in 1803. His place of birth was in Boston, Massachusetts. His father, Rev. William Emerson served as a Unitarian minister. His mother was called Ruth Haskins. Emerson was one of the five sons in the family that managed to survive to adulthood.

On May 12th, in 1811, tragedy struck the family as Emerson’s father kicked the bucket following his long battle with stomach cancer.

In 1812, Ralph Waldo Emerson enrolled with the Boston Latin School. Five years later, he joined Harvard College. In 1826, he became a licensed minister. Shortly after, in 1829, he was ordained to serve as a Unitarian minister.

Emerson’s career revolved around traveling and writing. During his trip to Europe in 1832, for example, he crossed paths with notable writers such as William Wordsworth, Samuel Taylor, and Thomas Carlyle. Upon his return home, he lectured on ethical living and spiritual experience related topics.

During the 1830s, Ralph Waldo Emerson continued with his lectures. These lectures would later be revised and printed in the form of essays. He then went ahead and earned the recognition for leading a group called the transcendentalists.

Ralph Waldo Emerson tied the knot with Ellen Louise Tucker in 1829. Unfortunately, she died from tuberculosis in 1831. After this, Emerson wedded Lidian Jackson Emerson as his second wife in 1835.