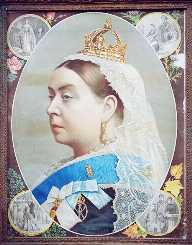 Queen of the United Kingdom of Great Britain and Ireland, Royalty

Alexandrina Victoria was born at Kensington Palace on the 24 May 1819.  Her father, the Duke of Kent, was the fourth son of George III. After the death of her father and two of her uncles, Victoria went on to ascend to the throne of England on 28 June 1838.

Queen Victoria had a simple upbringing in Kensington Palace, London. She had a half-sister Feodora she got along well with and a governess Baroness Louise Lehzen, she adored. Her mother remained single but had a close relationship with John Conroy who had previously worked for the late Duke of Kent, Victoria’s father. This relationship caused problems for Victoria because John Conroy had his eye on a Regency situation. He used his influence over Victoria’s mother to keep the young princess isolated from others. Eventually, Victoria rebelled against both of them. Later this led to a strained relationship with her mother and the banishing of John Conroy from her court.

Her coronation took place on the 28 June 1838 in Westminster Abbey.

Early Years on the Throne

Queen Victoria was determined to choose her husband. She had met her cousin Prince Albert of Saxe-Coburg and Gotha as a girl. Later when he visited England with his brother, Victoria was very impressed with him. They married on 10 February 1840. Albert stepped into the role that Lord Melbourne had previously held when he became his wife’s political advisor and confident.

There were a seven assassinations attempts on Queen Victoria's life. The first was in 1840 when Edward Oxford fired at the Queen when she was driving in her carriage close to Buckingham Palace. Victoria was unhurt, and Oxford was later found to be insane.

After visiting Scotland for the first time, Queen Victoria and Albert, the couple decided to spend more time there and eventually they bought Balmoral.

Albert was an able, capable man and he threw his considerable energy and intellect behind Queen Victoria. He convinced Victoria to set about creating a constitutional monarchy that was visible and proactive. The reason was partly that of the growing Republican movement in Britain and around the world. As part of this Victoria became involved with over a hundred different institutions and charities.

Albert concerned himself with education and trade. The couple travelled around to various towns, viewing factories and workplaces. They also offered support to the military. In other words, they showed people that the Royal Family worked hard and were relative in an ever-changing society. Albert was responsible for the organisation of the Great Exhibition of 1851 held in the famous Crystal Palace, constructed for the exhibition.

The couple had nine children: five girls and four boys born starting in 1840 and 1857. Queen Victoria found the entire business of pregnancy and childbirth distasteful. They were devoted parents and set out to be an example of wholesome, Christian family life. Eight of these children married into European royalty.

In addition to Balmoral in Scotland, the family had a summer house on the Isle of Wight: Osborne House is in East Cowes. The house was built between 1945 and 1851, according to Albert’s design. The builder was Thomas Cubitt. Today this beautiful house is in the care of English Heritage and is run as a tourist attraction.

In 1861, Albert contacted thyroid and died. Queen Victoria went into seclusion for over twenty years, wearing black for the rest of her life. Someone who helped her through these years was the unlikely person of John Brown, her ghillie and personal servant from Balmoral. He was a strong-willed Scot whose straight talking appealed to the Queen. Her children loathed Brown, but Victoria continued the friendship until John Brown’s death in 1883.

As monarch, Queen Victoria was the head of the Church of England.

One of  Victoria’s favourites in later life was Abdul Karim who became her personal Munshi, or teacher. He taught Victoria about Indian affairs, culture, and languages. The Queen was fascinated by India and acknowledged Karim’s assistance by giving him lands in India and other honours.

In 1877 Queen Victoria became Empress of India. Her prime minister Benjamin Disraeli had recommended that she accept it. She approved of his imperialist views. In time, imperialism brought Queen Victoria popularity at home.

When she died at Osborne House on the Isle of Wight on the 22 January 1901, Queen Victoria was Britain’s longest reigning monarch. She had reigned for 63 years and 216 days.  She was the last of the House of Hanover.

The young queen unwittingly got embroiled in an upsetting incident which resulted in some of her subjects booing her in the street. Unknown to everyone, Lady Flora Hastings, a lady-in-waiting had a swollen abdomen caused by liver cancer. The court gossip assumed that it was a pregnancy. Word got around that Victoria had written and spoken about the supposed pregnancy. Victoria tried to make amends and visited Lady Flora on her deathbed in 1839, but the situation was unpleasant for some time.

Accusations of Unconstitutional Behaviour by the Queen

When the Whig government lost office, Queen Victoria's new prime minister was Robert Peel, a Tory. Peel asked the Queen to replace her Whig ladies-in-waiting with Tory ladies and was upset when she refused. The Queen was said to be acting unconstitutionally.

Queen Victoria was a prolific writer. She started keeping a diary when she was a girl continued with it all her life. She left 120 diaries as well as letters and publications. Her memoir about Scotland was a bestseller in its day.

Queen Victoria first used the Irish State Coach for the State Opening of Parliament in 1852, and it has been used by British monarchs ever since. The Victoria Cross is another lasting legacy. War. Another, probably unintended legacy from the Victorian age is Queen Victoria’s role in the celebrity cult. In 1860 a set of photographs of the royal family were made available to the public. Over 50,000 copies sold.