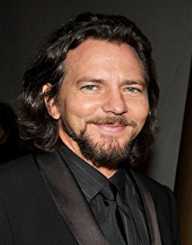 Eddie Vedder is one of the world leading vocalist as well as a guitarist of the alternative rock band. He was ranked no 7 of the Best Lead Singers of All Time. He was a great and highly blessed person who changed the world with his powerful vocals and distinctive voice. He also changed the way alternative rock looks by adding some music style to it. He is good and has a way of invoking the use of storytelling on personal, social and most time, political things.

He often channels his energy towards his music to portray his tumultuous early life. Eddie Vedder was a member of Temple of the Dog and Pearl Jam. He hit the music industry very big and made music that bust the charts. Over the years, he made a lot of contribution to other artists works and as well come up with two solo albums Into the Wild and ukulele songs.

Eddie Vedder was known as Edward Louise Severson III at birth and was born to Karen Lee Vedder and Edward Louise Jr. on December 23, 1964, in Evanston, Illinois. He was one year old when his parents separated. It was during that period that his mom remarried Peter Mueller. Vedder always believed Mueller to be his biological father and was known to him as Edward Mueller. The family was large at that period, and the family of seven siblingshas to move out of their large house. He later discovered that Mueller was not his biological father after his mother’s divorce with him. He found it hard to study as a result of this and chose to take up the name Eddie Vedder and worked as a waiter to earn his High School GED.

Eddie Vedder took up several odd jobs in a bid to pursue his music in 1984. He had to start recording demo tapes and worked in various San Diego bands. Sooner, he got himself included in a band as a vocalist in 1988. He later had a stint with Bad Radio which does not last long. After the end of this relationship with Bad Radio, he had a relationship with Seattle after sending them some musical lyrics and vocals of three music. Surprisingly, these songs became Alive, Once and Footsteps. He was later invited by Stone Gossard and Jeff Ament for a new project, Temple of the Dog. He sang a duet for the album and provided the background vocals.

Eddie Vedder was recruited to Pearl Jam’s band as one of the drummers. The sign, in 1991, came up with a debut album Ten after signing to Epic Records. The album got them fame as the band’sten became the best selling alternative music album. It got different awards for the album. The band later made a tour and hit the studio to record a second album, Vs. This album broke the record for most number of copies sold in a week.

It was a fantastic experience for the band as the album was received with open hands by the people. A triple success hit was earned by the band as Vitalogy got them a straight three-album success. Thus making them successful and having a multi-platinum status. However, Eddie Vedder’s role cannot be pushed behind on the influence of the band. Eddie Vedder played on rhythm guitar, back up vocals as well as drumming. However, the band did not meet up to people’s expectation with their album No Code, but a succeeding album beat all the records. They kept on releasing an album which was successful.

Eddie Vedder’s career is not restricted to the Pearl Jam’s band as he extends his domination to the music scene. Eddie Vedder released several compilations as well as soundtracks which include but not limited to I am Sam, Body of War, Better Days and Brokedown Melody. He also contributed to a movie Into the world as well as Hard Sun and Society. He came up with his albums which won several nominations. He also made live performances with different other artists. He tried his hand on acting to and played roles in some movies.

Eddie Vedder contributed immensely to the success of Pearl Jam as a vocalist and one of the lead guitarists of the alternative rock band.

Eddie Vedder was ranked as number 7 on the Best Lead Singers of All Time by Rolling Stone.

Eddie Vedder got married to Beth Liebling, his long-time girlfriend in 1994 and got divorced in 2000. He later got married to Jill McCormick and had two daughters. Vedder is a die-hard lover of the American Professional Baseball Franchise Chicago Cubs as well as Chicago Bears.