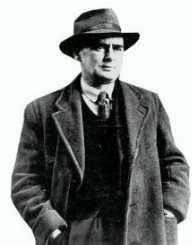 Flann O'Brien? was an Irish novelist, newspaper columnist, and dramatist who wrote under many aliases.

Flann O’Brien was born on 5th October 1911, in Strabane, Ireland. His original birth name was Brian O’Nolan. He was one of the ten children in their family. He attended the Catholic Blackrock College in Dublin.

After his primary school, he enrolled at the University College in Dublin. He studied at the School of Arts, specializing in History and Literature, and the German language. During his stay at the college, O’Brien became an active member of the Literary and Historical Society. In this group, he wrote and directed many poems and debates on literature.

In 1934 he joined other students and formed a school magazine called Blather. Though the magazine did not pick up in that college, O’Brien showcased his talent as a columnist.

After the death of his father, O’Brien decided to join the civil se5rvice to take care of his family. Joining as a clerical officer, O'Brien rose to be one of the most senior officials of the service. He once worked as the private assistant of Irish Minister Sean O’Kelly. Political activities were not allowed in the service. O’Brien started publishing columns in daily newspapers under fictitious aliases. His seniors discovered him. Though his contemporaries enjoyed his writing, O’Brien was at loggerheads with his seniors. O’Brien was clear that everyone knew his pseudonyms in the media, but some of his seniors chose not to comment on it. In his growing boldness, O’Brien started using the newspaper columns to give derogatory remarks on his seniors. He even went to use his name in one of the articles. At work, he went into the habit of drinking on duty or coming to work while drunk. In 1953 O’Brien was retired from the civil service.

Without his job, O’Brien concentrated on his new job. He started writing novels. In 1960 he published the revised edition of his earlier novel At Swim Two Birds. He explored his ability in combining the traditional Irish and Gaelic cultures of narrating poetry and legendary stories.

In 1961, he published his second novel The Hard Life. In this novel, O’Brien talks of the role of the Catholic Church in Ireland. He also discusses the education system derived from the church system and the sense of Irish identity in the midst of this setup.

In 1964 he released The Dalkey Archive. In this publication, O’Brien narrates the story of one deranged scientist who is bent on destroying the world and all that is in it. He first tries to eliminate the oxygen from the air. After failing, he works to find another more appropriate method to finish his job.

In 1967 he released the novel The Policeman. In this humorous satire, O’Brien narrates the story of society prone to murders. The law enforcement officers are fat policemen who cannot work efficiently in coping with the criminals.

In 1968 O’Brien published a set of journals in a book titled The Best of Myles. In this book, O’Brien compiled what he thought is the best of all of his journalistic column publications.

In his career, he wrote 14 publications. As Myles, he did eight publications and also did seven as Flann O’Brien.

O’Brien used a combination of styles in his writing. He rarely conformed to the standards of modern English. He blended the English culture into the Irish and rural Gaelic tradition which is considered rich in folklore oral narrations.

In most of his poetic publications, he used a mixture of Irish and Gaelic language regulations and norm standards in creating his stanzas and verses.

Flann O’Brien died on April 1, 1966, in Dublin. He was buried at the same place as his parents. His remains lie in his grave at the Deans Grange Cemetery in Dublin, Ireland. His health was seriously affected by his habitual drinking. In his twilight years, his health withered. He fought a battle with throat cancer. In the end, he succumbed to cardiac failure.

O’Brien was a committed family person. He left his studies to join the workforce when his father died. He provided for his siblings for the time he was a civil servant, When he lost his job, he lacked the comfort of the same people he dearly provided for. He slumped into alcoholism.

He was a natural satirist and storyteller. Adept in the history of the Irish people, O’Brien used the local sceneries to communicate his ideas to his audience. He inspired many of his contemporaries in Ireland.