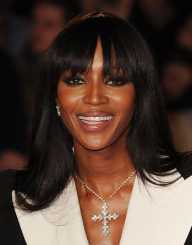 Naomi Campbell was born on May 22nd, in 1970. She is a renowned model and an actress. Aside from this, Campbell is also a talented singer. Right from a tender age of 15, Campbell took on her modelling career.

When she was only 18 years old, she earned high acclaim for being the first black woman to appear on Vogue’s cover. Similarly, she received many accolades for being the Time’s cover.

Naomi Elaine Campbell was born on May 22nd, in 1970. Her place of birth was in Streatham in South London. She was the daughter of Valerie Morris.

Her father was left unnamed on her birth certificate as he left the family when Campbell’s mother was only four months pregnant. Due to this, Campbell’s mother ensured that she would never meet with her father.

Similarly, the supermodel would acquire her surname from the second marriage that her mother entered into. Campbell has a half-brother called Pierre.

Naomi Campbell joined Barbara Speake Stage School when she was only three years old. Subsequently, she enrolled with the Italia Conti Academy of Theatre Arts when she was ten years old. Here, she took ballet lessons.

When Naomi Campbell was aged seven, she made her first public appearance after featuring in Bob Marley’s music video dubbed “Is This Love.” Shortly after, she also appeared in Culture Club’s music video called “I’ll Tumble 4 Ya.” She was tap dancing in this video.

The young and talented Naomi Campbell was quickly spotted by Beth Boldt in 1986. Boldt chaired the Synchro Model Agency. It is from this point that Campbell’s career took a different turn.  It did not take time before she featured on the cover of Elle, a British magazine.

After featuring in Elle, Naomi Campbell's career was on the rise as she landed on a notable role as a model for different designers including Azzedine Alaïa, Isaac Mizrahi, and Gianni Versace.

Around this period, she also worked with notable photographers including Herb Ritts, Bruce Weber, and Peter Lindbergh. With time, Campbell’s fame grew, and at the end of the 1980s, she paired with Linda Evangelista and Christy Turlington and called themselves the “Trinity.” They were the most admired and demanded models at the time.

Apart from modelling, Naomi Campbell also earned critical acclaim due to her singing talent. Her music career brought her to the limelight mostly in Japan with the release of “Love and Tears.” Regardless, her first album called Baby Woman failed terribly as it only sold around one million copies.

Naomi Campbell has a reputation for being hot-tempered. As a result, this has also landed her in trouble. In mid-2008, she was charged for assaulting two police officers. In January 2007, she also pleaded guilty to reckless assault on her maid for throwing her phone at her over misplaced jeans.

Consequently, Campbell was obliged to cover the maid’s medical expenses. Also, she was forced to attend an anger management program to help her.

Naomi Campbell got engaged to Adam Clayton, a U2 bassist in 1993. Nevertheless, the two separated after a year of being together. Later, in 1998, she was again engaged to Flavio Briatore; a Formula One head.

The two never got married as they separated in 2003. Recently, in 2017, rumor has it that Naomi dates Louis C. Camilleri, an Egyptian multimillionaire.