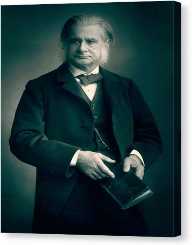 Thomas Henry Huxley was born on May 4, 1825, in Ealing, London, England. His parents were Rachel Withers and George Huxley. He also had seven older siblings.

As a child, Thomas Henry Huxley attended the Ealing School, which was in his hometown. However, the school was shut down when he was only 10 years old, and he had nowhere else nearby to study. Instead of abandoning his studies altogether, he began to teach himself by reading books. His favorite subject to study was science, namely, biology.

In 1838, he began to work as a medical apprentice. While doing this, he also continued his independent studies.

He first entered college in 1841 when he enrolled in Sydenham College. Here, he continued studying medicine. He stayed here for a short period of time before transferring to Charing Cross Hospital. He later instead attended the University of London, where he took his M.B. examination. However, he did not complete his exams, and never earned a degree.

In 1845, Thomas Henry Huxley joined the crew of the HMS Rattlesnake, a ship in the Royal Navy, as an assistant surgeon. This ship traveled all around the world. While traveling, he, of course, did his job as a surgeon, but he also studied the nature and wildlife of the places he visited. While on this trip, he also wrote and published several papers on his discoveries and observations. He worked on this ship until the early 1850’s.

After finishing his time on the HMS Rattlesnake, he began teaching at the Royal School of Mines as a professor of natural history. Most of his classes were lectures on the biology that he loved to study himself. He focused mostly on plant and animal life, rather than the biology of humans. While here, he also continued to work on his independent research.

One of the things Thomas Henry Huxley was best known for was his belief in evolution. He thoroughly supposed evolutionists like Charles Darwin, as his own studies seemed to point to the same conclusion. He argued against creationists (people who believe everything was created at once, as it appears today), getting into hot debates more often than he should have.

In 1855, Thomas Henry Huxley began working at the Royal College of Surgeons. He worked here until his retirement in 1890.

From 1862 to 1882, Thomas Henry Huxley was involved with a dozen commissions that had to do with everything from studying the biology of an area to fishing. He worked with The Royal Commission and for the Royal College of Science for Ireland to complete these commissions.

Huxley’s articles and essays were popular during his lifetime and afterward, too. Many of his articles were on the subject of biology and evolution. Some of his most famous essay and article titles are listed below.

On the Physical Basis of Life

Huxley’s awards are due to his advancements in science. Some of his most prestigious awards are listed below.

Thomas Henry Huxley was a member of a number of prestigious groups, including the following: British Association for the Advancement of Science, Marine Biological Association, and the Royal Society.

He was made a Knight of the Order of the Polar Star by the King of Sweden.

Thomas Henry Huxley was married to Henrietta Anne Heathorn. Together, they had eight children.

Thomas Henry Huxley died on June 29, 1895. His cause of death was a heart attack. He was 70 years old when he passed away.