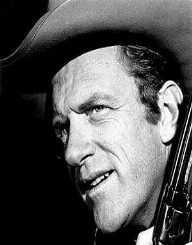 James Arness was born on May 26th, in 1923. He is celebrated for being a talented actor during the golden era. Her garnered profound fame for his role as Marshal Matt Dillon in the CBS TV series called Gunsmoke.

One of the main reasons why Arness is best remembered in the entertainment industry is that he played his role in five distinct decades beginning in 1955 to 1990s.

James Arness was born on May 26th, in 1923. His place of birth was in Minneapolis, Minnesota. Before taking on his acting career, he was known as James King Aurness.

However, he later adopted the name Arness dropping the “u.” He was the son of Rolf Cirkler Aurness and Ruth Duesler.

His father was a businessman whereas his mother worked as a journalist. Arness had a younger brother who was also a known actor. Peter Graves was his younger brother.

James Arness went to John Burroughs Grade School before joining Washburn High School and later West High School. While studying at the school, he also took a part-time job as a courier. Regardless of being regarded as a poor student, he successfully graduated in 1942.

James Arness served his country during the Anzio Battle where he succumbed to serious bullet injuries after being shot in his right leg. Arness was admitted to the general hospital where he was later discharged in 1945.

The pain inflicted on him from the wound continued even after departing from the army.

Immediately after leaving the army James Arness went on to work as a radio announcer. With time, he moved to Hollywood. His film debut role came with the role he played in The Farmer’s Daughter – 1947. This was followed by other parts in The Thing from Another World and Them!

James Arness rose to fame with the role he played in Gunsmoke. This made him a worldwide film star alongside his co-actors such as Milburn Stone, Dennis Weaver, Buck Taylor and Ken Curtis.

James Arness wedded twice in his lifetime. In 1948, he married Virginia Chapman and divorced her in 1960. In 1978, he married Janet Surtees.

The two spent their lives together until James Arness passed away. In this relationship, Arness was blessed with two sons namely Rolf and Craig. He also had a daughter called Jenny Lee Arness.