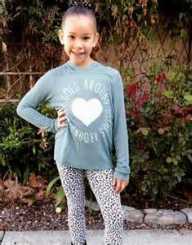 Olivia Haschak was born on 1st September 2005. She is the youngest of four girls. Her sisters are Madison, Gracie, and Sierra.

Olivia Haschak performs with her sisters, all very talented dancers. The Haschak sister’s YouTube channel has over two million subscribers. This is an indication of how good they are, shown by the popularity of their channel.

The Haschak Instagram account also has a huge following, with over 500,000 subscribers. The popularity of Olivia Haschak and her sisters shows the influence that social media has in modern society, particularly among younger generations.

Haschak trains at the Temecula Dance Company, where she has learned a variety of dancing styles including tap, jazz, ballet, and hip-hop. At only 11 years of age, she is already putting the dance lessons to great use through social media performances.

In 2015, Olivia Haschak performed on Dancing with the Stars along with her sister, Olivia. She has also performed in various dance competitions including, Countdown Dance Competition in California, Dance Educators of America, and Hall of Fame Dance Challenge.

Olivia Haschak and her sisters did a video cover of Mark Ronson’s “Uptown Funk.” She also has a stage production under her belt, having starred in “The Perfect Gift.”