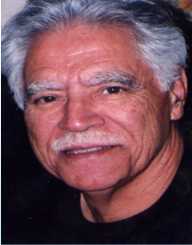 Author Rudolfo A. Anaya was born on the 30 October 1937 in the village of Pastura, New México in the United States into a family of Mexican ancestry. His parents were Rafaelita and Martin Anaya. Anaya and his siblings, two half-brothers and four sisters, were raised in Santa Rosa, New México. His mother’s family were farmers from the Pecos Valley area of New México, and his father came from a family of sheepherders and cattle workers.

In 1952, Rudolfo A. Anaya's family moved to Albuquerque, and he was a pupil at Alburqurque High School (1956). After graduation, he enrolled at the University of New México where he obtained a B.A. in the American and English literature (1963). He subsequently completed two master’s degrees at the university, the first in 1968 for English and the second in 1972 for guidance and counselling.

Rudolfo A. Anaya initially worked as a school teacher in Albuquerque (1963-1968). He then joined the University of Albuquerque as the director of counselling (1970-1973).

Rudolfo A. Anaya's first novel Bless Me, Ultima was published in 1972 which was part of a trilogy. The other two novels in the series are Heart of Aztlán (1976) and Tortuga (1979). These books concerned the lives of Hispanic children living in the United States. Bless Me, Ultima was made into a film in 2013. After the success of his first novel, Anaya joined the English faculty at the University of New México (1974-1993).

Rudolfo A. Anaya has won many awards. The first was the Premio Quinto Sol for Bless Me, Ultima (1970). Other awards include the New México Governor’s Public Service Award which he won twice, in 1978 and 1980. The American Book Award 1980, the Award for Achievement in Chicano Literature (1983), a Kellogg Foundation Fellowship (1983-1985), Mexican Medal of Friendship awarded by the Mexican Consulate of Alburquerque (1986), the PEN-West Fiction Award (1992).

Other distinctions are the NEA National Medal of Arts Lifetime Honor (2001), the People’s Choice Award (2007) from the New México Book Awards, the Robert Kirsch Award (2011) and the Paul Bartlett Re Peace Prize Lifetime Achievement Award in Literature (2014. In 2015 Anaya was awarded the National Humanities Medal.

Rudolfo A. Anaya married Patricia Lawless in 1966. Lawless was a school counsellor who also taught literature before retiring in the 1980s. The couple had two children, Matias and Ellie. Anaya retired in 1993. His wife died in 2010.