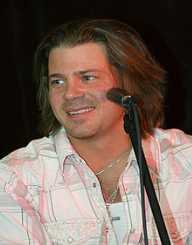 Brad Kane was a student at the New York University of Cinema where he studied the history of film,

In college, he had a band, the Misconceptions, of which he was the lead singer.

Brad Kane showed an interest in drama at a young age and when he was three years of age he appeared in the movie Six Weeks. By the age of eight, he had a role as a chorus boy in Evita on Broadway. His next role was in Sunday in the Park with George. When Kane was eleven years old, he took part in the Very Special Arts Festival, various charitable events which included singing at the White House and the Kennedy Center.

As a young actor, Kane appeared he appeared actor in several television series including Law & Order. He also did television commercials.

Brad Kane was a senior in high school in 1990 when he was offered the opportunity of singing in the film Aladdin. Kane sang the title character opposite Lea Salonga. The due sang A Whole New World, at the 65th Academy Awards. Kane also sang A Whole New World with Joey Yung at Hong Kong Disneyland on the 11 September 2005.

Brad Kane released an album in 2008, This Day in History, and the same year began working as a writer and co-producer on the science-fiction series Fringe which he did for two seasons. He projects he worked on include The Cure, The No-Brainer, Inner Child and Daredevil and Black Sails.