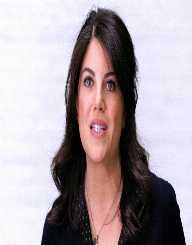 Monica Lewinsky was born 23rd July 1973, to Bernard and Marcia Lewinsky. She was born in San Francisco, California, United States. Her family was a wealthy one, and she grew up in the Westside Brentwood area of Los Angeles, as well as Beverly Hills. Her father was an oncologist, her mother, under the name Marcia Lewis, released a biography called, The Private Lives of the Three Tenors. Monica Lewinsky's parents divorced around 1988, and it had a profound impact on her. Both her parents have since re-married.

Monica Lewinsky studied at Beverly Hills High School, but for her final year of high school, she transferred to Bel Air Prep, from where she graduated in 1991. After high school, Monica Lewinsky studied at Santa Monica College. At the same time, she worked for the drama department at Beverly Hills High School. It is alleged that in 1992, she began an affair with her married former high school drama instructor, which lasted five years. She enrolled at Lewis & Clark College in Portland, Oregon, in 1993. She did her Bachelor’s Degree in Psychology, graduating in 1995.

Monica Lewinsky began working in an unpaid position as a White House intern, in July 1995. This was made possible through the help of a family friend. In December 1995, she took up a paid position in the White House Office of Legislative Affairs. Bill Clinton was President at the time but was being dogged by sexual misconduct allegations by a former Arkansas state employee, Paula Jones, when he was in the role of Governor of Arkansas. Jones filed a civil lawsuit against him. Her lawyers were trying to show he had a pattern of this behavior, and it was at this time that Lewinsky’s name appeared.

In April 1996, Monica Lewinsky's superiors had transferred her to the Pentagon, feeling that she was spending too much time with Clinton. At the Pentagon, Lewinsky told one of her co-workers, Linda Tripp, about her explicit relationship with President Clinton. Tripp began to record their conversations. Monica Lewinsky left her position in the Pentagon in December 1997, and in January 1998, she submitted an affidavit in the Paula Jones case, denying she had had a physical relationship with Clinton. She tried to get Tripp to lie under oath, but, instead, Tripp handed over the recorded conversations.

The sexual encounters were alleged to have happened between November 1995 and March 1997. Clinton, under oath, denied having a sexual affair, sexual relations, or, a sexual relationship with Monica Lewinsky. He categorically denied any wrongdoing in a media interview in January 1998, which is when the scandal broke worldwide in the news. It was at this time that Lewinsky’s affair with her former teacher also became publicly known.

Clinton tried to say he had been telling the truth, and it had been the context in how the words were used. He didn’t fool anybody. At a later time, after it came to light that Monica Lewinsky had handed in a dress with Clinton’s semen stain on it, Clinton admitted to having an inappropriate relationship with her.

Clinton and Monica Lewinsky both appeared before a grand jury to give their testimonies.

Monica Lewinsky became an ovenight sensation. Although she was limited by her immunity as to what she could publicly discuss, she was still able to help Andrew Morton, giving her side of the story, in the biography, Monica Lewinsky's Story. She made approximately $500,000 from the book.

She also appeared with Barbara Walters to be interviewed on the ABC show, 20/20. The ABC said the show was watched by 70 million Americans, which was a record for a news show. Monica Lewinsky earned around 1 million dollars from the interview.

Cashing in further, Monica Lewinsky released her line of handbags in 1999, under the company name of The Real Monica, Inc. The bags sold online but were also retailed at Henri Bendel in New York, Fred Segal in California, and The Cross in London, UK.

Monica Lewinsky signed a $1 million-dollar deal with Jenny Craig, Inc, to appear in their television commercials. It proved to be very controversial for the company, and in the end, her ads ended early, and she was only paid $300,000 of the contract amount.

Monica Lewinsky continued to cash in on her fame, becoming an A-list celebrity guest in the Manhattan social scene, and appearing on television, including a documentary on HBO once her immunity agreement was finished, and hosting a reality television dating program.

Searching For Anonymity And Re-Emergence Into Public Life

Monica Lewinsky moved to London in 2005 to get away from the public spotlight in the U.S. She enrolled in the London School of Economics, and in 2006, she graduated with a Master of Science Degree in Social Psychology.

Monica Lewinsky tried to stay out of the limelight for the next few years. She lived in London for a period, then moved to Los Angeles, New York, and Portland. Unfortunately, because of her past, she found it difficult to gain employment in her chosen field of marketing and communications.

In 2014, Monica Lewinsky wrote a story for Vanity Fair magazine, discussing her life and the Clinton scandal.

Since October 2014, Monica Lewinsky has become an outspoken advocate against cyberbullying. She has spoken at summits, such as the Forbes magazine 30 Under 30 summit, and given a TED talk on the subject. She has also taken to social media to get her message out.

In 2015, Monica Lewinsky became an ambassador for Bystander Revolution, an anti-bullying organization.