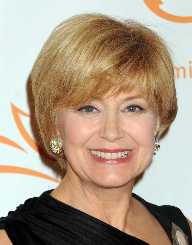 Jane Pauley is an American television personality and a new anchor.  She is known for her years with NBC's Today Show and Nightly News.

Jane Pauley was born on October 31, 1950, in Indianapolis, Indiana.  Her father Richard was a milk salesman in the town of Bloomington, Indiana.  Her mother Mary was a homemaker and church organist.  Jane also has a sister, Ann, with whom she is very close.

Pauley graduated from Warren Central High School in 1968 where she was active in speech and debate.  She then attended Indiana University where she was a member of the Kappa Kappa Gamma sorority.  She graduated in 1972 with a degree in political science before working as a reporter in Indianapolis.

Jane Pauley stayed with Indianapolis news stations for a few years before she found work as a reporter for the NBC affiliate in Chicago.  She was the first female co-anchor for the evening newscast. When Barbara Walters was ready to leave her position as host of the Today Show, Pauley was selected at the age of 25.  She co-anchored with Tom Brokaw, Bryant Gumbel, and Matt Lauer.  She stayed there from 1976 to 1989.  At the same time, she was the Sunday anchor for NBC Nightly New from 1980 to 1982.

When Pauley was pregnant with twins in 1983, she became the symbol of working mothers.  Not only was she presenting and contributing the news for the Today Show and NBC Nightly News, but she was making headlines herself.

Jane Pauley chose to spend more time with her children in 1989. However, there was a rumor that she was pushed out by a younger anchor Deborah Norville.  Viewership of the Today Show took a major decline, and Pauley's absence was considered a contributing factor.  Pauley was still a substitute anchor and had her own primetime special in 1990 called Real Life with Jane Pauley.

In 1992, Real Life transitioned into the newsmagazine show Dateline.  Pauley was co-anchor alongside Stone Phillips.  She stayed with Dateline until 2003 as well as anchored the MSNBC show Time and Again.  When her contract was set to expire, she did not renegotiate with NBC.

In 2004, Jane Pauley hosted her syndicated talk show The Jane Pauley Show.  It was canceled after one season.  Pauley remained active and continued to contribute to other shows and news stations including PBS.

Pauley's life in the media made her a recognizable face in other aspects of television and film.  She was interviewed for big name talk show hosts in the 1980s such as David Letterman, Johnny Carson, and Phil Donahue.

In 2016, Jane Pauley played herself in the comedy Zoolander 2 and also appeared in two episodes of the TV series Madam Secretary.  In 2014, she was a contributing correspondent on CBS Sunday Morning Show.  In October 2016, she became the host of the show for retiring Charles Osgood.

Jane Pauley married Garry Trudeau, the creator of Doonesbury cartoons, in 1980.  The couple had twins Ross and Rachel in 1983 and a son Thomas in 1986.  She also has two grandchildren.

Jane Pauley struggles with bipolar disorder.  She went public with her experience in her 2004 autobiography Skywriting:  A Life Out of the Blue.  She states that the disease was triggered by medication she took after hospitalized for allergic reactions that turned into hives.

The Mind Trust funds educational innovation and reform.  On an international level, Pauley is part of the Ambassadors Council from Freedom From Hunger. When it comes to those in need in Indiana, she co-founded the Jane Pauley Community Health Center to help anyone in need of medical services regardless of income or insurance.

An inductee into the Broadcast and Cable Hall of Fame, 1998

Your Life Calling: Reimagining the Rest of Your Life (2009)