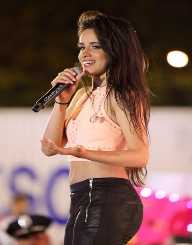 Camila Cabello is a pop singer formerly from Havana, Cuba. As one of the original members of Fifth Harmony, she is taking her act solo.

Camila Cabello was born on March 3, 1997, in Cojimar ,Havana, Cuba. Her name at birth was Karla Camila Cabello Estrabao.  Her father is Mexican, and her mother is Cuban. The family stayed in Cuba and Mexico until she was five years old. Then they moved to the United States and lived in Miami, Florida.

Camila Cabello attended Miami Palmetto Senior High School. She dropped out of the school to pursue her music career. She did finish high school and planned on earning a college degree.

Camila Cabello auditioned as a solo singer for the reality talent shows The X Factor. She did not move on by herself during the “boot camp” portion of the audition. However, she was asked to join the group Fifth Harmony. At the age of 15, she and the rest of the girl band started their journey to stardom.They finished in third on the show and signed a music deal with Syco Music and Epic Records with the help of Simon Cowell.

Camila Cabello started releasing albums with Fifth Harmony in 2013. The EP “Better Together” was released that year. Their next albums Reflections and 7/27 came next along with many touring events and performances. They recorded the song “I Am In Love With a Monster” for the movie Hotel Transylvania. In December 2016, Fifth Harmony announced that Cabello was leaving the group to pursue a solo career.

Camila Cabello started duets with other singers as early as 2015. One of her more successful collaborations was with Shawn Mendes in “I Know What You Did Last Summer.” She also released singles with Machine Gun Kelly, Cashmere Cat, and Pitbull.

Camila Cabello has been connected with other singers including Austin Mahone and Shawn Mendes.

Camila Cabello suffers from OCD and anxiety. Even though she still sings and performs, she has learned to slow down and take care of herself. One thing that she has learned that helps her is reading books.

Camila Cabello has been a partner with Save The Children since February 2016. The organization is focused on raising the awareness of issues including girls' equal access to education, healthcare, and opportunities to succeed. Cabello has also worked with the nonprofit arts organization OMG Everywhere. The organization hosts free art workshops for kids. Camila Cabello along with producer Benny Blanco created a single along with students of the studio. The single is titled “Power in Me.”

With her group Fifth Harmony, Camila Cabello won the following awards and achievements:

Group of the Year, Billboard Women in Music, 2015,

Collaboration of the Year, “Work From Home,” American Music Awards, 2016

Camila Cabello loves music, but she is also an avid reader.