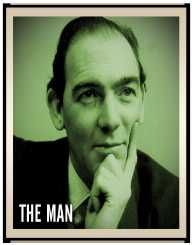 Renowned British writer and thriller novelist John Edmund Gardner was born on 20th November 1926 in Seaton Delaval, a suburb near Northumberland. He was the son of a London-born Anglican Priest named Cyril Gardner and his wife, Lena Henderson. In 1933, the Gardner family relocated to the market town of Wantage (previously known as Berkshire) where John’s father found work as a Chaplain at the St. Mary’s Church. John began his primary education at the local King Alfred’s School.

At the tender age of 13, while the World War II was still underway, John Gardner voluntarily joined the Home Guard and was subsequently commissioned in the Royal Navy Fleet Air Arm. He was then transferred to serve in the Royal Marines 42 Commando. After the war came to an end, John enrolled himself at St John's College in Cambridge and began the study of theology. Eventually, he was consecrated an Anglican Priest in the year 1953. However, John soon realized that he had chosen the wrong career path as he had neither faith nor devotion to the religious teachings. As a result, he was released from his duties at the Church in 1958.

John Gardner then joined the Stratford-upon-Avon Herald as a drama critic. At that time, 33-year-old John was heavily addicted to alcohol. In 1964, he kicked off his addiction and published his memoir titled ‘Spin the Bottle.’ Before moving to a career in writing, John also performed as a stage magician for a short while.

In 1979, John Gardner was approached by Glidrose Publications who requested him to write the sequels of the famous series of novels titled ‘James Bond’ created by Ian Fleming. Gardner accepted the offer and from 1981 to 1996; he penned down 14 novels in the James Bond series. The first novel was titled ‘Licence Renewed’ and was published in the year 1981. It was followed by ‘For Special Services’ in 1982. Next in line came ‘Icebreaker’ in 1983 and ‘Role of Honour’ in 1984. In 1986, Gardner wrote his fifth novel in the James Bond series titled ‘Nobody Lives for Ever.’ This novel was considered as the best of the five books he had written by that time.

Following the release of the fifth novel, John Gardner came up with three more books in three consecutive years viz. ‘No Deals, Mr. Bond’ (1987), ‘Scorpius’ (1988) and ‘Win, Lose or Die’ (1989). ‘Scorpius’ received a warm welcome but ‘Win, Lose or Die’ faced harsh criticism. In 1989, he published ‘Licence to Kill’ which was later adapted into a movie. In the following year, he came up with the tenth novel in the series named ‘Brokenclaw.’ ‘The Man from Barbarossa’ published in 1991 is regarded as Gardner’s best James Bond novel to date. His last novel in the ‘Bond’ series was ‘Cold’ published in 1996.

Apart from the Bond series novels, some other well-known works of John Gardner includes the Professor Moriarty novels - ‘The Return of Moriarty’ (1974), ‘The Revenge of Moriarty’ (1975) and ‘Moriarty’ (2008). He also penned the Railton family novels - ‘The Secret Generations’ (1985), ‘The Secret Houses’ (1988) and ‘The Secret Families’ (1989). Four of his books titled ‘The Liquidator,’ ‘The Nostradamus Traitor,’ ‘The Dancing Dodo’ and ‘The Garden of Weapons’ were shortlisted for Crime Writers' Association’s ‘Gold Dagger Award’ in the category of the best crime novel.

Following the release of ‘Cold’ in 1996, John Gardner took a break from writing after the unexpected death of his wife, Margaret Mercer. In 2000, he returned to writing after a 5-year-long sabbatical with the novel ‘Day of Absolution.’ After his return, he created his last character - a police detective named Detective Sergeant Suzie Mountford. His last book in the series titled ‘No Human Enemy’ was published in 2007.

John Gardner entered into wedlock with Margaret Mercer in 1952. They had two children named Simon and Alexis. John also had a daughter named Miranda who was a love child born out of a long-term relationship with Susan Wright.

In 1989, during his stay in the USA, John Gardner was diagnosed with prostate cancer. The expensive treatment took a toll on his financial condition and left him bankrupt. He returned to the UK in 1996. Shortly after his return, John’s wife passed away unexpectedly. The trauma led John to take a break from his writing career. Within a few months, he was also diagnosed with esophageal cancer. On 3rd August 2007, he suffered a massive cardiac arrest while shopping at Basingstoke and was immediately rushed to the hospital. John Gardner passed away at the ripe age of 80 after suffering from heart failure.