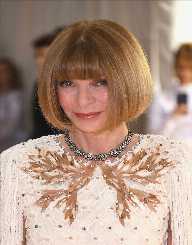 Anna Wintour relates suitably with an anecdote of creative nonfiction and fashion genre. Her preparation mode permits her to come up with juicy facts about the selected Fashion Week. When it comes to editing and fashion journalism, Anna is known as the most influential living soul in the industry. She abides by her trademark roles just like an early bird, all thanks to her editorial lead at Vogue magazine. Further, Anna shows her artistry at Conde Nast Media Company. Behind her wholly styled bob and her all sets of black Chanel sunglasses, Wintour has proved to be a fashion-show fixer. Allow me to introduce to you to 67 years old noblewoman in the Scorpio women category.

On November 3, 1949, Anna Wintour was born in London, the United Kingdom to Charles Wintour and Eleanor ‘Nonie’ Trego Baker. Her parent divorced in 1979. She was named after her great-grandmother who was a merchant daughter. Before his father’s demise, he married Audrey Slaughter who was a magazine editor and the founder of Honey and Petticoat publication. Not to mention, a great novelist Lady Elizabeth Foster was Anna’s great-great-grandmother. Anna grew up with her four siblings, but her elder brother, Gerald died due to a sudden accident when he was a child. Patrick is her younger brother who is also in the journalism industry and a political editor at The Guardian. Nora and James Wintour have also established themselves in non-governmental organizations.

Anna Wintour attended North London Collegiate School where she showcased her intelligence. She fully obliged to her school’s rules but she tailed off one thing. Her school skirt was shorter which she didn’t like from the beginning. At 15 years old, Anna got her first job at a famous boutique ‘Biba.' She opted to drop out of school where she joined a training program at ‘Harrods.' Her parents took her to a fashion class but dropped out halfway.

From her teenage years, Anna made sure she has displayed her bob hairstyle everywhere she went. After a long delay, Wintour became to admire London life. She made sure she has visited tasty London clubs that prominent personnel’s such as Rolling Stones and Beatles frequented. She liked a nobility kind of fame. With her slender figure, her prayers were answered. I mean she had good connections with older men like an English novelist Piers Paul and Nigel Dempster.

Even then, Anna dreams were still intact. She constantly viewed Cathy McGowan, at the ‘Ready Set Go’ song. Her father counseled her to edit young generation newspapers and make them more appealing. She landed a job at one of her boyfriend’s company the Oz where she produced lots of magazines.

In 1970 Anna Wintour landed her first job as an editorial assistant at the Harper’s & Queen. Here she met with influential photographers such as Helmut Newton and Jim Lee. Her tight connections gave her a chance to get a glimpse of several photos shoots locations. She later resigned and went to join her journalist boyfriend in New York. She then landed a junior fashion editor job where she obliged to work full time in 1975.Unfortunately; she got fired after nine months.

Jon Bradshaw, her boyfriend, connected her with women’s adult magazine Viva. She worked for several months till its closure in 1978.In the mid of 1980 she became a Savvy fashion editor, and after two years Anna got a contract from the New Fashion company base. She worked under Editor Edward where she learned different sections such as marketing her copies with celebrity’s front covers. In 1983 Anna took a directive job at ‘Vogue.' After three years she was announced as the chief editor of the British Vogue where he traveled back to London to take her white-collar position.
In her role, she managed to change several duties such as replacing managerial staffs as well as proving that she got her stance. There and then, names like ‘Nuclear Wintour’ and Wintour of Our Discontent’ followed.

Anna Wintour partnered with Home and Garden publication of Conde Nast where she did her best to set her professional standards. Her changes included discarding over $2 million worth of photos and many more. When she was appointed as the new head of the department, the magazine failed to accumulate its usual annual profit.

Wintour also played a huge role in the Vogue magazine production. Her rigorous effort transformed the fashion company into a modern kind. Her cover-ups consisted of celebrities instead of flaunting models. Her photoshoots included both low and end fashion products. In 2013 she was declared as the artistic directors of Vogue magazine. She subsequently lifted herself and other fashion designers including Marc Jacobs and Alexander McQueen.

Anna Wintour is a Democratic Party fan who was seen during the 2000 presidential run of John Kerry. She also appeared in 2008 during Barack Obama presidential run. In 2012 Anna served as a political fundraiser and host together with Sarah Jessica Parker. In 2013 Anna hired Hildy Kuryk to play the role of communication at Vogue. In 2014 she was seen in The Fashion Fund documentary that targeted the Vogue Fashion Fund competition and Non-American designers. Anna has received awards like BFC Outstanding Achievement Award.He has also paid a huge role in charities like AIDS and CDFA/Vogue Funds.

Anna Wintour married David Shaffer in 1984. The couple was blessed with two children; Katherine and Charles. They later divorced in 1999. According to Forbes Anna is the 39th World’s Most Powerful Woman.