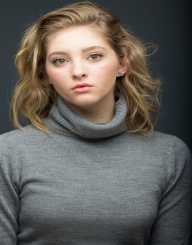 Willow Shields is a young, fabulous and upcoming American actress and dancer whose achievements have impressed many. She is famous for her sterling performance in a film series known as ‘The Hunger Games’, where she took the role of Primrose Everdeen. Her success is a source of inspiration to the young generation and encourages them to use their talents to tap opportunities that come their way at a young age.

Willow Shields was born on June 01, 2000 in New Mexico at a place known as Albuquerque. She is sixteen years old, and her parents are Rob and Carrie Shields. She has two siblings: a twin sister known as Autumn Shields and a brother, River Shields who are also performers. She is homeschooled and has a great passion for History and Reading. Before she started to act, she had dreams of pursuing engineering. Also, a camera she possesses is a reflection of how much she craves fashion and photography.

Her first induction took place when she was ten in 2008. Willow Shields narrated a short film that was produced in her hometown New Mexico with the title ‘Las Vegas New Mexico 1875.' After that, she participated in an episode of teen-oriented horror anthology series ‘R. L Stine’s’.

In 2009 Willow Shields appeared ‘In Plain Sight’ series and later appeared also in ‘The Wonder” film in 2013.These numerous works done within a short period have considerably changed her life and mindset. Passionately, she struggles perpetually to improve her skills to ensure success in her profession.

In her first audition in the movie, ‘The Hunger Games’ movie series Willow Shields performed enormously well as ‘Primrose Everdeen,’ which earned her fame and initiated new opportunities to act in other films. For instance, in 2011 she appeared on the CBS’, an American broadcast Television networks in ‘Hallmark Hall of Fame’ movie ‘Beyond the Blackboard’ which was filmed in her hometown New Mexico. The story was a young teacher who had just completed college and got an opportunity to teach in a poor children school. She got support from her husband who enabled her to overcome fears and prejudice in providing quality education to the children.

On February 24, 2015, Willow Shields won an opportunity to participate in Season 20‘Dancing with the stars’. She was the youngest ever to win such an occasion. She has also played in the film with the title “A Fall from Grace.”

At her young age, Willow Shields loves to support the needy in the community. She has portrayed this in various activities. They include: serving food at homeless shelters, being a vocal advocator of a charitable organization ‘Operation Smile’ which aims at ensuring face repair for children who experience facial deformities in the world. In 2013, wreckage caused by a hurricane occurred in Oklahoma leading to a considerable loss. Willow Shields willingly offered her support in the rebuilding and the repair of the damages caused.

Willow Shields is a Christian who loves dogs and chicken and made them her pets. Due to her young age, she respects and follows decisions made by her parents. She loves music and artwork especially making trading cards during her free time. Besides, her hobbies include cooking and reading books and this has aided her in the entertainment industry.