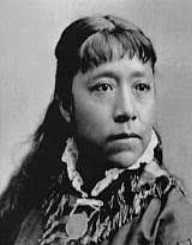 Sarah Winnemucca was born around the year 1844. Her birthplace is believed to be near the Humboldt Lake in Nevada. She was the daughter of a tribal chief of the Paiute people. Her father was Chief Winnemucca and her mother, Tuboitonie. Her native name Thocmetony loosely translates as the shell flower in English. She later adopted the name, Sarah.

Winnemucca had a normal life of her tribal people. She had minimal contact with the invading European settlers. Many horror stories about the white man had been narrated to them as children. The biggest fear was that the white man was a cannibal, delighting in Native American flesh. It was until the year 1850 that she accompanied her grandfather to California.

Her grandfather had befriended and fought alongside the settlers during the American war with the Mexicans. They were hosted in California by US army commander Captain Fremont. Winnemucca shied away from any possible contact with whites. One day she fell sick and was taken care of by a white nurse. After her recovery, she gradually started appreciating the white man.

Sarah Winnemucca's education was mostly informal. She proved an excellent linguist from her childhood. Winnemucca mastered English, Spanish and other Native American languages around California. At the request of her grandfather, she went to live at the home of Major William Ormsby. At one time, she was taken to a formal school. She was expelled for being in a white children school.

Like her grandfather and father, Sarah Winnemucca maintained a friendly relationship with the white man. As the influx of the white settler increased, the land became scarce. Regular conflicts emerged. Winnemucca became the intermediary between the two parties. The US government had agents who were the official contact with the natives.

Tensions were rife, and in 1860, a war erupted. The Paiute tribal warriors were pacified by the US army. After the war, they were moved to a native reserve in Oregon. She continued being the interpreter for the natives and the military.

Things changed in 1878. The Bannock tribal warriors went to war with the army. They captured the Paiutes who were considered allies to the white man. In a daring rescue mission, Sarah Winnemucca went slipped into the enemy camp and rescued her family. When the army arrived, the Bannocks were defeated. As punishment, both the Bannock and Paiute tribes were exiled to the Yakima native reserve. Many died in the camp due to disease, cold and starvation. This was over 350miles away from their land. The new US agent was unsympathetic to her plea.

Dismayed by the betrayal, Sarah Winnemucca turned her efforts to advocate for the rights of her native people. She traveled across the west galvanizing support to her course. She got empty promises from the US-appointed agents. In 1880, she met the US president in Washington DC. The meeting was brief, and Winnemucca was assured of the safe return of her people. The Interior Secretary and President Rutherford Hayes rescinded on their promise.

She got support from others who arranged for tours around the US. The lectures were mainly on the eastern side of the country. Her visit galvanized support, and she managed to publish a book on the plight of the Native American people. With the funds she got from the books, Winnemucca founded a school for Native American children in 1884. The Peabody School was closed after four years for lack of operating funds. She continued her advocacy for the better part of her later life.

Sarah Winnemucca was married twice to two former US army officers. She got married to First Lieutenant Edward Bartlett in January 1872. They divorced in 1876 after her tribe was exiled to the Malheur reserve.

Her second marriage was to Lieutenant Lewis Hopkins. The army lieutenant later died in 1887. It is believed that Winnemucca had been married to a native husband though there is no mention of his name in documented history.

Battered and dejected from the failed promises by the US government, Sarah Winnemucca retired to live with her sister Elma. She passed away in Montana on the 17th day of October in 1891. She was eulogized by many within the military as a great military lady.

Winnemucca was the first Native American woman to write and publish an English book. A school in Nevada bears her name. Her miniature statue is on display in the Statuary Hall in Washington DC.