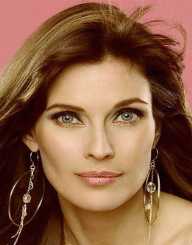 Carol Alt is a famous American model, actress, and author. Born on December 1, 1960, she achieved enormous success in modelling appearing in over 700 magazines cover including Sports Illustrated and Vogue. She is the pacesetter of what is now known as “supermodel” trend.

She later ventured into acting making a debut with Via Montenapoleone in 1986. Other works include Vendetta: Secret of a Mafia Bride, Miliardi, Private Parts, Storm Tropper, Revelation and Mattie Fresno, and the Holoflux Universe. She also has some books to her credit, which promotes raw food diet.

Carol Alt was born on December 1, 1960, in Flushing, Kings, in New York to Muriel and Anthony Alt. Her father was a fire chief and her mother was a model and worked for an airline. She has two siblings Christian and Karen. Alt was not interested in fashion during her early age and was more attracted to sports including football and hockey.

After high school, she earned an Army ROTC scholarship to enrol at Hofstra University in 1979. To earn enough money, she also worked as a waitress at a local steakhouse. It was during this period that a photographer discovered her and managed to convince her to try out modelling. He subsequently took her to Elite Modelling Agency, where fashion mogul John Casablancas offered her a contract on the spot. This was when she decided to drop her college ambition and pick up modelling as a career.

In 1979, Carol Alt made a breakthrough in modelling after appearing on the cover of Harper’s Bazaar magazine. However, she gained the needed recognition and fame when she appeared on the cover of the Sports Illustrated Swimsuit Issue in 1982. Within the 1980s, Alt featured on the covers of more than 500 magazines, making her one of highly sorted for models of the time and attained a supermodel status. She appeared on popular magazines including Cosmopolitan, Elle, Mademoiselle, Vogue, Vogue UK, Vogue Paris, and Vogue Italia.

With her intense popularity, Life Magazine described her as “The Face” while Playboy termed her "the most beautiful woman in the world." Alt became the face of several giant companies during her peak. She was the face of General Motors, Givenchy, Cover Girl Cosmetics, Hanes, Diet Pepsi, and Noxzema among several others. Alt also became the first model to produce personal calendars and posters.

After a successful modelling career, Carol Alt ventured into acting by appearing in several Italian films. She made a debut in 1986 with the movie Via Montenapoleone and followed it with My First Forty Years, 1987, Bye Bye Baby, 1988, La più bella del reame, 1989, Beyond Justice, 1990, Miliardi, 1991, and Ring of Steel in 1994.

Carol Alt has written some book to promote her raw food diet plans Who's Who in Hollywood, (1992), Eating in the Raw: A Beginner's Guide to Getting Slimmer, Feeling Healthier, and Looking Younger the Raw-Food Way (2004), The Raw 50: 10 Amazing Breakfasts, Lunches, Dinners, Snacks, and Drinks for Your Raw Food Lifestyle, (2007), and Model, Incorporated, (2009).

Aside from her mainline career, Carol Alt worked as a consultant with the Le Mirador skin-care line and appeared on late night TV infomercials. In 2008, she competed in NBC’s The Celebrity Apprentice with Donald Trump for her foundation Tony Alt Memorial Foundation. She placed third and was able to raise $40,000 for her foundation. She also contested in the Italian version of Dancing with the Stars (Rai Uno) in 2009. Alongside her partners Philip Masiello and Stephen Krane, she found the skin-care line, Raw Essentials in 2008.

Carol Alt was inducted into the Ride of Fame in 2013.