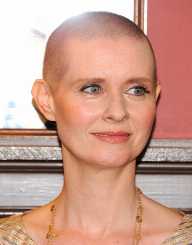 Cynthia Nixon is well acclaimed for being a cynical lawyer in the HBO series, Sex, and City. She is a famous television, theater as well as film actress. Following her success with the HBO series, she kept on getting roles to play in series based on the HBO concept. Although she might not be considered to be very beautiful with her look; her unique look was able to earn her a perfect position among other actresses like her. She has been in the show business for a long period because she was born to an actress and a radio journalist.

Cynthia Nixon was known for her numerous confidence which said she inherited from her parents. She is always ready to act in such a way that people will be very much delighted in her. She even started her acting career at 12 when she did follow her mother to act. Cynthia Nixon was able to acquire roles easily due to her pure talent, hardwork and her mother’s position as an actress. She appeared in movies, televisions as well as theatrical production as a teenager. She fought cancer during her career and won.

Cynthia Nixon was born to an actress Anne Knoll and a radio journalist, Walter Nixon. She had gone to Hunter College High School before she changed to Barnard College. There, he studied with Semester at Sea in 1986. Her parents’ show business, however, influenced her so much that she was very confident and always ready to take any daring role. She was known to be very good as an actress and always ready to show the world what she’s made of.

Her first work was on the television game show, To Tell the Truth where she appeared as an imposter. However, her first acting role was in the ABC Afterschool Special, The Seven Wishes of a Rich Kid in 1979 at the age of 12. She later made her debut film, Little Darlings in 1980 where she played the role of Sunshine. The film had other kid actresses like Tatum and Kristy. She later appeared in 1984 while she was still in college in The Real Thing and Hurlyburly. These plays happen to be Mike Nichols’ hit Broadway plays. She kept on acting and later got herself a role to appear in a two-part TV miniseries, The Murder of Mary. She later played another miniseries in 1991, Love, Lies and Murder. It seems the movie in 1988 earned her the latter role.

By 1993, Cynthia Nixon has been getting momentum and becoming popular among the American audience. She played a role in a legal crime thriller, The Pelican Brief in 1993. She later played a role in Marvin’s Room which happened to be a drama film in which members reunite after being estranged from each other. 1998 was a lucky year for her as she got the opportunity to act as Miranda Hobbes in Sex and the City, the HBO sitcom. Cynthia Nixon acted as a career-driven lawyer who is so much skeptical towards men. She was loved by the audience and enjoyed a lot of recognition as the series ran till 2004. After this, she kept on portraying in different roles.

She acted in the 2002 comedy drama, Igby Goes Down and Warm Springs which was a story about the US President, Franklin Roosevelt's struggle with polio. Cynthia Nixon also starred alongside Emma Roberts and Rory Culkin in 2009 Lymelife. Around 2012, she worked on a novel adaptation, World Without End. She acted in the eight episodes of the miniseries that tells the story of the war in a fictional English town.

Her major and most successful work as an actress was her work as Miranda Hobbes who is a successful but career-driven lawyer that is highly cynical about men. Her role as the lawyer earned her a lot of recognitions and acclaim. Cynthia Nixon won several awards and nominations and became very popular among the American audience.