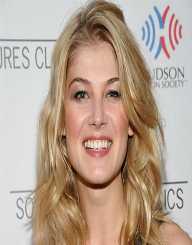 There is indeed something unique than just a little splendid look or jaw-dropping figure. Everywhere Rosamund Pike steps, you will be left with a mesmerized spotlight. This beautiful actress comes with a growing status that can only be defined by her well-acted movies. She is probably one of the most prospective starlets in Hollywood film industry.

Rosamund Pike has managed to compile an excellent list of acting experience. This brought her positive results since her teenage life. Pike has been around for some time, but you probably didn’t notice her presence in a spark.

She had previously done significant series with amicable actors. But she kept still and waited for her roar day. At 16, Pike was encouraged to embrace art. At 16, she was introduced into The National Youth Theatre thus after she learned to play the cello and piano.

Rosamund Pike was born in Hammersmith, London, England on 27th January 1979. Her father, Julian Pike, works as the head of operatic studies at the Birmingham Conservatoire. Her mother, Caroline is a professional Violinist and an Opera Singer. Pike toured across Europe in her teenage years, all thanks to her parent's performances.

Later on, Rosamund won a scholarship to Badminton School in Bristol at National Youth Theatre. She followed her career and went to Wadham College, Oxford to study English Literature. In 2001, Pike garnered an Upper Second Class degree.

It wasn’t that difficult for Rosamund Pike to appear in her acting career. Her parents being the leading Song Operas, this was her gateway. She was first seen in several shows such as Wives and Daughters, Love in a Cold Climate and A Rather English Marriage. At this time she was still studying at the University of Oxford.

After her graduation, Pike worked at Waterstone's Bookshop as she wasn’t able to get any acting opportunities. Later on, Rosamund was lucky to get A Die Another Day role as a Bond girl. She was then seen in the film Bond Girls Are Forever. Escorted by Johnny Deep, Pike played The Libertine as Elizabeth Malet. The film earned her the Best Supporting Actress award.

Rosamund also participated in The Promised Land as Rose while in the computer series as Doom. Early 2005, Pike played Pride & Prejudice as Jane. Still, in the same year, she joined in fugitive pieces which were the adoption of Michael’s novel.

In 2011, she was into the film scene again. This is where she took a role of a psychologist as well as English’s love interest in Johnny English Reborn. The film earned $160 million hence succeeding at the box office level. In 2012, Pike participated in the movie Wrath of the Titans as Queen Andromeda which was also an excellent success. Then, she appeared in a thriller film -Jack Reacher with an escort of Tom Cruise as Hele Rodin. The Gone Girl movie made a remarkable stance.

In 2007, Rosamund Pike was engaged to Joe Wright who was a film director. They coupled for about a year. They later separated in 2008. Pike then dated Robbie Uniacke who is an ex-drug addict as well as an English businessman. Both have two children; sons, Atom and Solo.

In 2003, Rosamund Pike earned an Empire Award for her Die another Day movie. As well, she won the British Independent Film Award for Libertine Movie. She has attained various awards in movies like Gone Girl.