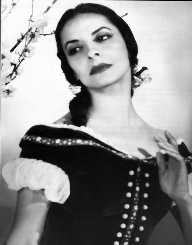 Alicia Alonso was born in Cuba; she is a ballerina and choreographer. She is remembered for her role as Carmen and Giselle in La Scala. She performed with renowned bands such as the Vienna, Prague State Operas and Paris Opera Ballet.

She is the founder of Alicia Alonso Ballet Company in 1948. She became the first dancer from Western to receive an invitation to perform at the Soviet Union.

Alicia Alonso was born on 21st December 1920. She was the last born in a family of three girls and two boys. Her family was financially stable; Alonso's childhood was relatively comfortable. Her passion for dance started at a young age.

She took her first ballet classes at the age of nine. Her first public appearance came at the age of 10 in 1931. Alonso's rapid rise in dance was however put on hold when she decided to get married to Fernando Alonso who was her fellow student.

After she gave birth to her daughter, Alicia Alonso went to the School of American Ballet. Together with Leon Fokine, Enrico Zanfretta, Alexandra, Fedorova, and Anatole Vilzak, she took private classes.

Alicia Alonso's eyesight was affected with the condition that made her partially blind at the age of 19. A surgery to rectify the problem was performed. After a successful surgery, she was instructed to lie in bed for her complete healing motionlessly.

After three months of waiting, the bandages in her eyes were removed. The surgery did not go as expected, forcing her doctors to perform a second surgery. She was supposed to lie in bed for an entire year with restrictions such as chewing food too hard, crying, laughing or moving her head.

She was finally allowed out of bed but was still not allowed to dance.

When Alicia Alonso was hoping to get back to doing practice, a hurricane hits the door in her home, spraying pieces of broken glasses to her face. Despite the injuries she received, Alonso was lucky that her eyes were not affected. The hurricane was a blessing in disguise for Alonso.

The doctors figured out that if such an explosion did not affect her eyes, dancing would not do her any harm. She was later cleared to go back to training. Despite the challenge, Alonso's passion for dancing did not die. She used instincts and expected her collogues to be in the right dancing position at the right time. She also used lights on stage to help guide her.

In 1943, Alicia Alonso moved to New York City in an attempt to rebuild her dancing skills. The injury of Alicia Markova of Ballet Theatre opened a door for Alonso to rebuild her career. In 1946, her exceptional performance led her to be appointed to the role of a principal dancer of Company. During that time she also featured in Under Tow, Variations and The Fall River Legend.

Her vision was quickly concealed by her partners through their perfect and well-choreographed movements. Alonso returned to Cuba in 1948, with a dream of starting her own dancing company. She later founded Alicia Alonso Ballet Company. Her brother Alberto was a choreographer.

Alicia Alonso's inability to see continued to affect her career, during her 70s together with her aging colleagues of National Ballet put up a show in San Francisco. Despite her age, she continues to serve as a director in Ballet Nacional de Cuba.