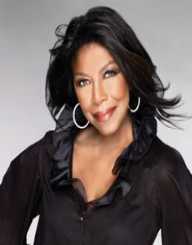 Natalie Cole is a Jazz Singer, songwriter, and actress. She is the daughter of Nat King Cole.

Natalie Maria Cole was born on February 6, 1950, in Cedars of Lebanon Hospital in Los Angeles. She is the older daughter of Nat King Cole and Maria Hawkins Ellington. She had younger twin sisters Timolin and Casey and adopted brother Nat “Kelly” Cole. She also grew up with an older cousin, who was a daughter of Maria’s younger sister, who was taken later. Natalie was raised in the affluent Hancock Park district of Los Angeles and was exposed to many great singers.

Natalie sang in her father’s Christmas album when she was six years old and began performing when she was eleven. She studied in Northfield School for Girls, a preparatory school before her father died of lung cancer in February 1965.

After graduating from University, Natalie Cole performed in small clubs with her band, Black Magic. She was noted by Chuck Jackson and Marvin Yancy, who helped her to produce a record. After that, they approached several record labels, but only Capitol Records, her father’s name, agreed to sign her. Natalie’s debut album, Inseparable was released.

Natalie was criticized for sounding like Aretha Franklin, a sound-alike who wasn’t Aretha Franklin. Some even commented that she was, a soul singer being eclipsed by disco. Worse, she was cashing in on her father’s legacy. However, Inseparable was a success in 1975, featuring “This Will Be (An Everlasting Love)” which won awards.

After the initial success, Natalie Cole released “Natalie” in 1976. The album was a success thanks to "Sophisticated Lady" and "Mr. Melody". After that she had her first platinum album, Unpredictable was published in 1977. In early 1980 she suffered a lull, due to drug addiction. After rehab, she released “Pink Cadillac” in the mid 80s.

“Unforgettable. With Love” was the album she is best known for, released in 1991. The album produced with Elektra Records, paying tribute to her father, Nat King Cole. She dubbed the famous song “Unforgettable,” making it sound like she was singing a duet with him.

Natalie Cole dabbled in acting after 2000; she appeared in television and music shows. Natalie also published her biography Angel on My Shoulder in 2000. She made guest appearances on I'll Fly Away, Touched by an Angel, Grey’s Anatomy and Law & Order, all in few years. In 2001, she stayed in Living for Love: The Natalie Cole story, which was an adaptation of her biography.

Other notable highlights in Natalie Cole's career include singing the National Anthem with Atlanta University Centre Chorus at Super Bowl 28. She performed in Annual Cayman Jazz Fest in the Cayman Islands in 2006. Her last album (22nd) was Natalie Cole en Españols, released in 2013, following her father’s footsteps. Her final recorded performance was a ten days before her death in Manila, the Philippines, being part of The Hitman: David Foster and Friends Asia Tour.

Natalie Cole married Marvin Yancy in 1976 and had a son together. Robert Adam Yancy was born 1977. They were divorced in 1980, and Marvin died in 1985 of the heart attack. In 1989, Natalie married drummer band Rufus, Andre Fisher. They divorced in 1995. She married Kenneth Dupree six years later in 2001, but the marriage only lasted four years.

In her autobiography, Natalie admitted her depression and drug use, which began while in college. Her addiction nearly killed her, forcing her to enter rehab in 1983. Due to her drug use, she contracted hepatitis C. Natalie received a kidney transplant in 2009 due to it. Before her operation, she appealed to the masses in Larry King Show about her kidney failure.

Natalie Cole died on December 31, 2015, in Los Angeles. Her family released a statement that she died from congestive heart failure, lead on by brought on by idiopathic pulmonary arterial hypertension after undergoing a kidney transplant in 2009. She was buried at  Forest Lawn Memorial Park in Glendale, California, after her funeral on January 11.

Natalie Cole supported many charities, including Musicare, National Kidney Foundation, Save the Children and the Hunger Project. She was a spokesperson for the United Kidney Research Organization.

She performed at Prostate Cancer Foundation Gala, Parrish Art Museum in Watermill August 29, 2015. This was her last show, before the cancellation of her tour and death in December.