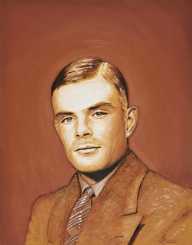 Alan Turing was born on June 23, 1912, in London, England. His parents were Ethel Turing and Julius Mathison. He had one brother, John Turing.

Alan Turing first attended primary schools for his education, including St Michael’s and the Sherborne School. After attending these schools, he began studying that the University of Cambridge (in the King’s College) in 1931. While there, he studied mathematics. It was at Cambridge that he earned his bachelor's degree.

After earning his Ph.D., Alan Turing began to work with the British government at the Government Code and Cypher School. Here, he focused on breaking codes which were used during World War II. He did not work at this post for long before the British government noticed that he was great at code breaking. Turing and his coworker, Dilly Knox, were hired to break codes which the Germans were sending.

Alan Turing began his work for the British Military in 1939, near the beginning of World War II. He did not work as a fighter, but as a code breaker. His work with computers had made him a key asset to helping the allies in the war. He was to break a German code, which would help to make wonderful progress in knowing Germany’s plans. To break the code, he used a machine called Enigma. The German codes often changed, which made deciphering the code difficult. Turing used some different mathematical equations to make a system to break the code.

Eventually, he made a device called the Bombe which used an analysis technique called Banburismus. The device and its technique were put into use in March 1940. He took him some time to break the code (along with a team of other mathematicians, including Knox). The device and code were a hit, and soon funding was found to make hundreds of devices like it to continue to solve the code.

Near the end of the war, Alan Turing traveled to the United States to learn more about codes. While there, he made a new method to solve code, which he named after himself: Turingery. After the war, he worked with the National Physical Laboratory. It was here that he invented a machine called the Automatic Computing Engine. He continued to work on this new machine into the 1950’s, constantly working on ways to update it. Future computers would use some of the aspects of this machine. This is why Alan Turing is known for helping to invent one of the earliest models of the computer (or what would be later known as a computer).

After working on his computer, Alan Turing went into teaching for some time, lecturing in colleges in England. He worked mostly with artificial intelligence that computers require to do even the most basic functions. He even invented a test to find out if computers were “intelligent” enough or not, called the Turing Test. His work helped to pioneer the way for artificial intelligence in computers to grow and develop into what we know computers to be able to do today.

After graduating from Princeton, in 1939, Alan Turing’s old college, the University of Cambridge, awarded the Smith’s Prize for his work in mathematics.

After World War II, in 1945, Alan Turing was awarded the Most Excellent Order of the British Empire by King George VI for his work with code breaking.

Alan Turing faced many struggles in his life, many of them based on the fact that he was gay. During his lifetime, it was illegal to be gay in England. This caused him both professional and personal trouble. Some of his work was stunted because others thought less of him because of his sexuality. He also had cover-up relationships to hide his sexuality, including an engagement to his co-worker, Joan Clarke. (However, the two never married.) Having to hide his sexuality, no doubt, had a terrible impact on his self-esteem and happiness.

He was later caught with a man and was put on trial for being gay. Alan Turing was found guilty and was forced to be on medication (which was thought to make him less gay). The medication did not make him straight, but instead made it difficult for him to work, which later made him depressed

Alan Turing killed himself with poison on June 7, 1954, in Wilmslow, England. He was only 41 years old when he passed away. His suicide has been debated to be an accident, (as Turing often worked with cyanide (the poison that killed him))but there is no conclusive evidence that it wasn’t a suicide.

Many biographies and other books, including Cryptonomicon, have been written about this famous mathematician.

The movie, The Imitation Game, was written about Turing’s time working on Enigma and the scandal that arose when others found out about his sexuality.

A statue of Alan Turing was unveiled in 2007 in Buckinghamshire, England.

In 2013, Alan Turing was granted pardon for his “crime” of being homosexual. In 2016, a law was passed which pardoned thousands of gay and bisexual English men (both living and dead) who had been prosecuted for their homosexuality. This was named Turing’s law. His conviction and (likely related) suicide went on to make life better for other gay and bisexual men in England.