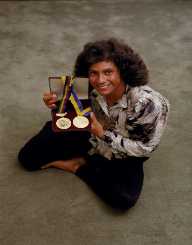 Fatima Whitbread was born on the 3rd day of March 1961 and was christened Fatima Vedad at birth. Her biological mother was of Turkish Cypriot descent while her father was a Greek Cypriot. She was not loved or wanted by her mother and was abandoned till neighbors called in a rescue team. Fatima spent the next four months after her rescue to recuperate from dehydration and malnutrition in the hospital. Fatima lived the next fourteen years of her life in halfway homes and welfare centers.

Fatima proceeded to Dilkes County Primary School in her early years and attended Culverhouse Secondary School after that.

Fatima Whitbread became an active sportsperson from her early years and was a regular at the athletics club near her. The javelin team at the athletics club was coached by Margaret Whitbread, and she was the one who spotted Fatima’s talent. She encouraged her and provided her with the warmth she desperately needed. It was not long after that that Margaret and her husband adopted her. The Whitbreads already had two sons of their own. Fatima got the last name, Whitbread from her adopted parents. She attended the Torells School in Grays after she was adopted.

Margaret Whitbread had an international career that peaked when she made a personal height of 45.18m in the year 1959. It was under her guidance that Fatima thrived and became a professional javelin thrower. Fatima was mentored by her to achieve a reach of 52 throws that exceeded 70 meters over the length of professional career. Fatima became the UK No I on six different occasions over the decade to 1988.

Fatima's first continental success appeared in 1979 when she bested her opponents to clinch the gold at the Bydgoszcz Junior Athletics Meet. She became the first woman of British descent to achieve the height. As she kept to her nurturing sessions, she graduated to the senior level in no time and began to make her mark.

In the 1980 Olympic Games that held in Moscow, Fatima Whitbread was not able to make it to the finals. Fatima was undaunted but went to work and clinched the Bronze medal at the Brisbane Commonwealth Meet in 1983. Fatima Whitbread failed to make the Gold impression in Helsinki in 1983 at the Inaugural Championships. She was beaten to the Silver position by the Finnish, Tiina Lillak. Other milestones trudged her path till 1987 after the Helsinki event. Fatima competed in the 1986 Commonwealth Games that held in Edinburgh, and it was an eventful one. Here, her teammate, Sanderson was pitched against her in a game of wits that saw them running on neck-to-neck. Fatima won after the fifth round.

At the Los Angeles Olympics, Sanderson overtook Fatima to clinch the gold, and only the bronze call was what Fatima made. Incidentally, during the year, Fatima had undergone surgery to take growth out of her womb. The world noticed that she put on a great stride to make it to the meet. Fatima's winning a medal at the end was a comforting topping for her after the health challenges she overcame. At the year’s Rome meet that followed, Fatima was once again at the dais to pick up the gold medal despite having a shoulder injury at the onset of the games.

Olympics Glory And Other Notable Mentions

Under her mother’s tutelage, Fatima Whitbread was able to compete in the three Olympics that held in her prime. She was able to set a world record at the 1986 athletics meet. She also triumphed at the Rome championship. She emerged the Sports Personality of the Year from the BBC. Whitbread came in for her last competitive event in the year 1989, and she was still young at the time having only celebrated her 27th birthday then. She had to face a nagging shoulder dislocation which did not go away in the next three years. Though she tried to return in 1992, the dislocation was not letting her be.

Her mother and coach, Margaret Whitbread were always close by, and she was there when Fatima decided she could not do any more of the competitive sports.

Fatima Whitbread's greatest attribution was her clinching the Stuttgart meet in 1986, where she bettered the world record for the Javelin event. She also emerged the world champion twelve months down the line at the Rome meeting. Her physique made her the butt of snide comments all through her career as she cuts a muscular look. Fatima's defense always was that she ate hard and worked the muscles out. She alluded to the field she had to fight against that often was made up of athletes who were a 6ft plus. This means she needed the power and strength she could muster with those muscles.

The muscles became a reality after eating large meals and consuming protein drinks as well as ice cream, milk and banana with three eggs. Fatima made this into a drink that she consumed on a pint-basis two times each day. This was the secret she let out on while she did not look like a woman. She confessed that her monthly periods escaped for the next eight years as she kept to the tough regimen. She beat the odds to conceive a child as her womb has been earlier diagnosed to have precariously thin womb walls.

Fatima Whitbread was able to conceive a son with Andrew Norman. They married in 1997 after she had left the competitive world in 1992. She lived in Essex with her family till her husband passed on.