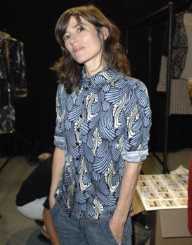 Bella Freud is an English fashion designer, writer, and actress; she is best known for her knitwear designs.

Freud was born in London, England on 17 April 1961. Her parents were Bernardine Coverley and Lucien Freud. Freud was the great-granddaughter of the famous psychoanalyst Sigmund Freud. Freud has one sister Esther Freud. Freud was raised in Marrakech, Morocco with her sister Esther. Esther chronicled their childhood in the book Hideous Kinky. Hideous Kinky was released in 1992 and adapted into a film in 1998. Their father Lucien Freud stayed in London and sent money to the family in Marrakech. Freud’s mother embraced a hippy lifestyle and embraced Sufism. Freud rebelled against her mother’s lack of boundaries and loved school and work. Freud went to study in Rome once she was old enough.

Freud began her career in fashion working for Vivienne Westwood. Westwood was a famous British designer who made her name by synthesizing her clothing with the punk and new wave musical movements. Freud worked for Westwood during the 1980s. Freud also worked with the British fashion chain Stirling Cooper. Stirling Cooper was one of the major clothing wholesalers in the U.K. Freud was hired by the clothing retailer Jaeger to update their brand. Freud revitalized the brand. She adopted the 1940s and 1950s style clothing designs. The most notable features of this new Jaeger line was her miniskirts and bomber jackets. Freud launched her self-titled brand in 1990. Knitted dresses and min tailored suits characterized her label. Freud was employed to relaunch the Biba fashion house. The brand had originally closed in 1975. Freud worked on two season launches, Spring/Summer 2007 and Autumn/Winter 2007, for the new relaunched Biba. Both efforts were roundly criticised for betraying the heritage of the original brand and for lacking a defining character.

Freud left in June of 2007, and the Biba brand went into administration the following year. Freud also worked with Miss Selfridge to design three capsule collections. Freud also worked on and had appeared in some films. She appeared as herself in the documentary The Legend of Leigh Bowery. The documentary chronicles the work and life of designer Leigh Bowery. The film was released in 2002. In 2004, Freud appeared, again as herself, in a documentary about her father, Lucien Freud Portraits. In 1999, Freud collaborated with American actor John Malkovich to produce three short films, Strap Hanging, Lady Behave, and Hideous Man.

Freud worked as a writer, producer, and actress in the three films. She also worked as a writer and costume designer in the experimental, Submission. She made her directorial debut in 2013. The film, Girl Boils an Egg, is a two minute long short. Freud has also released a range of scented candles and fragrances. Freud opened her first standalone store in 2015 in London.

Bella Freud is married to English writer James Fox, author of White Mischief. They have one child together.