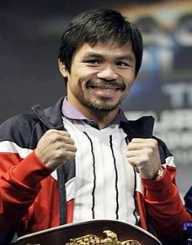 Manny Pacquiao is normally called is a well known Filipino boxer, a politician as well as a media celebrity. He was known to be the first and only eight-division champion all over the world. He has won ten world titles in total. He is also the first boxer in the world that has won lineal championships in separate categories. Manny Pacquiao was known to have come from a very low-income family and his rise to stardom has always amazed people around. He was named the Fighter of the Year three times by the Ring Magazine.

Manny Pacquiao has also been rated as the best pound to pound fighter in the year. Apart from boxing, he is also a basketball lover. He is the head coach of Mahindra Enforcers, a basketball team. In 2014, during the PBA draft, he landed 11th and became the oldest to be drafted into Philippine Basketball Association. He was elected to the House of Representative twice representing the Province of Sarangani. He is also the second highest paid athlete in the world.

Manny Pacquiao was born on the 17th day of December 1978 into the family of Rosalio Pacquiao and Dionesia Dapidran-Pacquiao. He was born in Kibawe, Bukidnon, Philippines as the fourth child of the family. While he was in the sixth grade, his parents got divorced. He, however, managed to complete his elementary school but dropped out of high school. He dropped out and left home due to poverty at age 14. He then chose to fend for himself.

At the age of 14, Manny Pacquiao moved to Manila where he joined the Philippine National amateur boxing team. There he had 64 fights which were the amateur record. At 16, he debuted in a four-round bout in the light flyweight division against Ignacio and which was won by him. He fought against CHatchai Sasakul and took the World Boxing Council (WBC) flyweight title. It became his first boxing honor in 1998 at age 19. He moved to a higher weight division where he captured the International Boxing Federation junior featherweight title against Lehlohonolo Lebwaba. He won the match by a technical knockout.

In 2003, Manny Pacquiao engaged in a career-defining fight for the Lineal and the Ring Featherweight Championship. He defeated Marco Antonio with a technical knockout again and got to defend his title twice. 2004 and 2005 were not too rosy for him. He fought Juan Manuel who was then the holder of WBA and IBF featherweight title in Vegas in 2004. The bout was regarded as a draw.  However, in 2005, he fought the Mexican legend, Morales and lost. He, however, won him in a rematch in 2006.

Manny Pacquiao has been successful with most of his fights as in 2008, he defeated the six-division world champion, Oscar De La Hoya, in the welterweight division. He also went ahead to defeat Ricky Hatton to win the Ring’s Junior Welterweight title. He engaged in a fierce fight which was nicknamed Firepower. He defeated his opponent in this fight. He, however, defeated him with a technical knockout and won the WBO Welterweight title. In 2012, he lost to Timothy Bradley. However, the decision that brought about his opponent’s win was a controversial one. In 2014, a rematch was staged with the duo and Manny Pacquiao defeated him. In 2015, he fought in the Fight of the Century against an undefeated American Mayweather. He, however, lost the game. This game was fought with his injured shoulder which prevented him from landing effective punches.

Apart from boxing, he is a successful politician as well as an entertainer. He showed his vocal abilities by releasing two albums. Manny Pacquiao, however, collaborated on some other tracks too. He also starred in several movies including the Show Me Da Manny. In addition to this, he won twice and got elected to the House of Representative of his district.

Manny Pacquiao is married to Maria Geraldine. The couple has four children who are Emmanuel Jr., Michael, Princess and Queen Elizabeth. The couple with their children resides officially in Kiamba, Sarangani which happens to be the wife’s hometown.