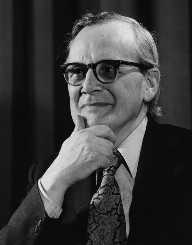 James Mirrlees was born on July 5, 1936. He is a Scottish economist. In 1996, he received the Nobel Prize for his research on economic incentives.

James Mirrlees was born as James Alexander Mirrlees on July 5, 1936, in South West Scotland, United Kingdom. In 1950, his family moved to Port William though he grew up in Newton Stewart. He attended the Primary Schools and the Douglas Ewart High School in Scotland. In 1954, he joined the University of Edinburgh where he studied philosophy and mathematics. He later graduated with a B.A. In 1957; he obtained his M. A. in mathematics and natural philosophy. He also won the Napier Medal. In the same year, he joined the Trinity College in Cambridge where he studied economics and other subjects. In 1963, he obtained his Ph.D. Degree from the College.

In 1962, he started his career as an adviser with the MIT Centre for International Studies, India Project in New Delhi. In 1963, he took up a teaching scholarship at Trinity College where he taught economics as an assistant lecturer. He later became a lecturer. James Mirrlees also started his research on optimum taxation in collaboration with Peter Diamond. He was an advisor to the British Labour Party. In 1966, he became an advisor for the Pakistan Institute of Development Economics, Karachi. In 1968, he moved to Oxford where he became a professor of economics. In 1971, he in collaboration with Diamond developed the ‘Diamond-Mirrlees Efficiency Theorem.’ At Oxford, he published many papers on economic models. He was also as Edge worth Professor of Economics and Fellow of the Nuffield College, Oxford. From 1968 to 1976, he was the Visiting Professor at MIT.

In 1996, he received the Nobel Prize for Economic Sciences. In 1998, James Mirrlees received his knighthood. He is currently a Fellow of the British Academy, the Econometric Society and the Royal Society of Edinburg. He is also a member of Scotland’s Council of Economic Advisers.  He is a Foreign Honorary Member of the United States National Academy of Sciences. He is also a Foreign Honorary Member of the American Economic Association.

In 1961, he married Gill Mirrlees with whom he has two daughters, Catriona and Fiona. His wife died in 1993. He is currently eighty-one years old.