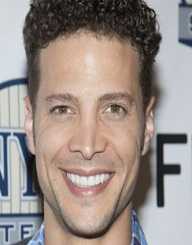 Justin Guarini was born on October 28, 1978, in Columbus, Georgia, United States. He is an American songwriter and singer. He was among the ten thousand contestants who participated in the 2002 new talent show search known as American Idol. After much elimination, he made it to the finals competing against Kelly Clarkson. He lost to Clarkson who took the first position in the contest. He has been active since 2002 to date.

Singer Guarini was born Justin Eldrin Bell to an African-American Eldrin Bell and Italian-American Kathy Pepino Guarini. He was born in Columbus, Georgia, the United States on October 28, 1978. His father was a former chief of police of Atlanta, Georgia and his mother worked as a journalist for WTVM TV in Columbus and CNN. He grew up in the care of his mother Kathy and stepfather Jerry Guarini in the suburbs of Doylestown, Philadelphia, Pennsylvania. At the age of four, he became a member of the Atlanta Boys Choir.

As a teenager, he went to Central Bucks High School East and later joined the University of The Arts in Philadelphia. He also studied at the School for Film & TV in New York.

In 1985, Singer Guarini moved to Pennsylvania and where he became a member of the Archdiocese of Philadelphia Boys Choir. He was actively engaged in school choirs throughout his academic life and was a talented soloist. From 1996 to 2000 he was a member of the a-cappella group known as The Midnight Voices as the lead soloist. The award-winning group later released their first debut album in 1999 after a music scholarship from Guarini’s former school Central Bucks High School East.

In 2001 he became the director at Riverside Haunted Woods in Bridgeton, Pennsylvania. Some of his early lead roles include ‘The Mystery of Edwin Drood,’ ‘The Little Prince, The Pirates of Penzance,’ ‘The Taming of the Shrew’ and ‘Once on This Island.’ He also became a skilled pianist, vocalist, and guitarist.

After completing his studies at the University of the Arts Philadelphia, Singer Guarini moved to New York and studied in the school of Film and TV. He worked in the nightclubs of New York and in April 2002 he auditioned for the television talent search show named American Idol. His audition was successful, and he declined an offer to work in the Broadway production of The Lion King.

His performances at the American Idol show received much acclaim from his fans and the judges as well. From one elimination to another, he survived the cuts and was the runner-up to Kelly Clarkson in September 2002. He lost to Clarkson in that year’s show but received a recording deal with RCA. In June 2003 he released his first album ‘Justin Guarini’ and also featured in the movie ‘From Justin to Kelly’ alongside Kelly Clarkson. In December 2003, he was left out of the RCA Records, and he proceeded to take up a role in the Broadway production in 2004 where he sung, played guitar and danced.

Singer Guarini left Broadway after declining the full offer and released his second album ‘Stranger Things Have Happened’ in December 2005. Apart from music he also featured in television programs including ‘Idol Wrap’ and ‘Idol Tonight’ as a co-host. His other works include ‘Revolve’ released in May 2008, ‘Did You Know That I Know Your Journey?’(2006), ‘Everlasting for documentary Project Everlasting’ (2006), ‘What You Won't Do for Love for Drivetime Reflections’ (2010). In films, he featured in ‘Fast Girl’ (2008), ‘Romeo and Juliet’ (2010).

Although his marital status remains uncertain, Singer Guarini had confirmed to the public about his planned wedding to her fiancé Reina Capodici in February 2009. He is said to have married Reina on September 26, 2009. He is currently thirty nine years old.