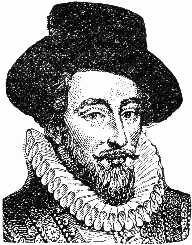 Walter Raleigh was a British writer, poet, politician, soldier, spy, courtier and a landed gentleman. Born on January 22, 1552, he is best known for popularising tobacco in England. As a soldier, he took part in the clampdown of and in the Siege of Westmeath. Walter Raleigh was also a key figure in the British colonization of North America. Walter Raleigh was a very popular figure during the reign of Queen Elizabeth and gained her favor leading to him being knighted in 1585. As an explorer, he gained a royal patent to explore Virginia, which served an as a prelude to the later English settlements there. Walter Raleigh also sailed to City of Gold in South American in 1594 and came out with some exaggerated accounts of the place in a book leading to the legend of El Dorado.

Walter Raleigh  served thrice prison terms in the Tower of London, first was after hesecretlymarried Elizabeth Throckmorton, one of the Queen’s ladies-in-waitingwithout taking permission from the Queen and the second was in 1603, when joined a plot against King James but was pardoned and released in 1616. His last arrest led to his execution in1618 after his exploration of Dorado led to the ransacking of a Spanish outpost. This act was contrary to his terms of pardon and against a peace treaty with Spain.

There have been different accounts of the childhood of life of Walter Raleigh  and even his date of birth has been in contention. There are historians who believe he was born on January22, 1552, while others set the year as 1554, which the Oxford Dictionary of National Biography also favours. Raleigh was born to Catherine Champernowne and Walter Raleigh  and the youngest child of five and grew up in the house Hay Barton a farmhouse near East Budleigh in Devon. His brother Carew Raleigh and half-brothers John Gilbert, Adrain Gilbert and Humphrey Gilbert all became prominent during the reign of Queen Elizabeth I and King James I.

Walter Raleigh 's family had a hard time during the reign of Roman Catholic Queen Mary I of England since they were fully committed Protestant. At one point, his father had to hide in a tower in order to escape execution. His detestation for Catholicism grew with him and in 1569, he joined the Huguenots in France to fight in the French religious civil wars. Walter Raleigh  was enrolled at the Oriel College, Oxford in 1572 but dropped out without a degree a year later. He later continued at the Inns of Court and by1575, he was admitted at the Middle Temple. He returned to France in 1576.

Walter Raleigh , therefore, sold the lands to Richard Boyle, 1st Earl of Cork in 1602. Walter Raleigh  had previously in 1585 been Knighted and appointed warden of the stannaries of the tin mines of Cornwall and Devon. Walter Raleigh  was also appointed the Lord Lieutenant of Cornwall and vice-admiral of Cornwall and Devon. From 1585 to 1586 Walter Raleigh  also served in parliament as a member for Devonshire and was given the right to colonise America. In the 1593 parliament, he was elected a burgess of Mitchel and Cornwall. After the death of Queen Elizabeth23 March 1603, Walter Raleigh  was arrested and charged with treason for his involvement of in the Main Plot against King James, her successor and imprisoned in the Tower of London on July 19, 1603. He was later convicted and remained in prison until 1616. While in prison, he wrote several treatises and The Historie of the World, which was about the ancient history of Greece and Rome and published in 1614.

Walter Raleigh  was granted aroyal patent in 1584 to explore, colonise and rule any"remote, heathen and barbarous lands, countries and territories, not actually possessed of any Christian Prince or inhabited by Christian People".He would, therefore, to receive one-fifth of all gold and silver to be mined there as his reward. Hence he was given seven years to come up with a settlement or else would lose all as rights as stated in the patent. Between 1595 and 1617, Walter Raleigh  led an expedition to Orinoco River basin in South America to search for the golden city of El Dorado and also deplored others to found the Roanoke Colony, which became the Lost Colony. As these expeditions were solely funded by him and his friends, he could not maintain a colony in America due to lack of funds. He tried another one in 1587 settling at on the Roanoke Island. The delay in sending supplies to the colonies there as initially planned led became a fiasco. One year became three and as the shipment later reached there, all the colonies were nowhere to be found. This led to thenaming of the settlement Lost Colony of Roanoke Island.

After serving more than a decade in prison, Walter Raleigh  was pardoned by the King in 1617 with a condition of avoiding any attack against Spanish colonies and shipping. He, therefore, granted him the permission to explore Venezuela in search of El Dorado. The unfortunate happened during this expedition as Raleigh as adetachment of his men under the command of his friend Lawrence Keymis raided Spanish outpost of Santo Tomé de Guayana on the Orinoco River, which was a gross violation of the peace treaties with Spain, and against Walter Raleigh's  orders. His son Walter was shot dead during an attack on the settlement and Keymis also committed suicide after the incident. Upon his return to England, the Spanish demanded justice and Walter Raleigh  were arrested and sent to London by Sir Lewis Stukeley. He unsuccessfully planned several escapes. Walter Raleigh  was found guilty and executed.

Walter Raleigh  was married to Elizabeth Throckmorton one of the Queen’s ladies-in-waiting. This marriage was a secret one done at the blind sight of the Queen. After the Queen heard of the marriage, Walter Raleigh and Elizabeth were imprisoned at the Tower of London in June 1592. Elizabeth was also dismissed from the court. The couple had two children Walter and Carew. Raleigh was executed on October 29,1618, in the Old Palace Yard at the Palace of Westminster.