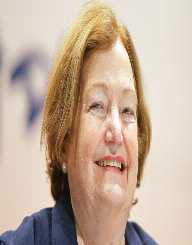 Mairead Maguire is an Irish Peace Activist from Belfast. A personal tragedy caused her to become involved in the Northern Ireland peace movement. She founded the Committee for Peace People with Betty Williams. Together they were honored with the Nobel Peace Prize in 1976. She continues to be involved in various peace causes. She firmly believes that violence is never justified. Gandhi’s concept inspires her that nonviolence does not mean passivity.

Born on January 27th, 1944, Mairead Maguire's birthplace is in Belfast, Ulster, Northern Ireland. Her parents Andrew and Margaret Corrigan belonged to the Roman Catholic Community. She has five brother and two sisters.

Mairead Maguire studied at St Vincent’s Primary School but had to drop out at the age of 14 owing to financial constraints. She then worked as a babysitter in the Catholic Committee and saved money for education. She enrolled for a year in Business Classes at Miss Gordon’s Commercial College.

At the age of 16, Mairead Maguire secured a job as an accounting clerk in a local factory. At 21 she took up a job as a Secretary for the Guinness Company and continued working until Dec 1976.

Mairead Maguire regularly volunteered with the ‘legion of Mary’ doing community service. She spent the evenings and weekends with children and visited inmates at the Long Kesh prison.

In August 1976 Mairead Maguire's sister ‘Anne Maguire’ was hit by a car when shopping with her children. The vehicle was driven by an Irish Republican Army (IRA) terrorist Danny Lennon. Danny was shot by British troops and lost control of the car he was driving. The three children were killed, and Anne who survived was heartbroken. Betty Williams witnessed this accident.

Betty collected signatures for a peace petition from Protestants and Catholics. About 200 women took part in a peace march. Mairead Maguire joined them when it passed her house.  Mairead and Betty became joint leaders of a spontaneous mass movement. They then organised a rally with 10,000 Protestant and Catholic women to the burial site of the three children.

Within a month over 35000 people petitioned for peace between the republican and loyalist factions on the streets of Belfast. This movement was called the Community for Peace or Peace People. The organisation also published a bi-weekly paper called ‘Peace by Peace’. They also took part in many social activities like providing bus services for families of prisoners etc.

Mairead Maguire was honored with the Distinguished Peace Leadership award in 1992 by the Nuclear Peace Foundation.

The Albert Schweitzer International University honored her with the Science & Peace gold medal.

Mairead Maguire founded the Committee on the Administration of Justice in 1981. This organization serves to defend Human rights. She is a member of the Pro-Life group Consistent Life Ethic. This organization fights against abortion, capital punishment and euthanasia.

Mairead Maguire is one of the Founders of Nobel Women’s Initiative along with other peace prize laureates. They aim to bring peace with justice and equality. They also work to strengthen woman’s rights around the world. Maguire works with various interchurch and interfaith groups and is a patron of Methodist Theological College of Northern Ireland Council for Integrated Education.

Mairead Maguire has authored a book “The visions of Peace: Faith & Hope in Ireland,” which was published in 2010.

Betty Williams resigned from Peace People group in 1980. However, Mairead Maguire continues to be involved in the organization. She has served as the group’s honorary president. She has travelled to more than 25 countries to promote peace and justice through non-violence. Sheis a member of various other organisations and has campaigned for several political prisoners throughout the world.

Her sister Anne committed suicide in 1980 owing to depression. Mairead Maguire then married her brother-in-law Jackie Maguire in 1981. She has three stepchildren and two of her own.