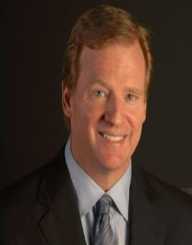 Roger Goodell was born on February 19, 1959, in Jamestown, New York, USA. His parents are Jean and Charles Goodell. He also has four siblings.

While in high school, Roger Goodell made a name for himself as an up-and-coming sports star, as he was the captain of his school’s football team. His skills on the field earned him a scholarship to play football and attend classes at Washington & Jefferson College.

While attending Washington & Jefferson College, Roger Goodell played on the school’s football team during his freshman year. However, he later stopped playing football but stayed at the school to take classes because he had suffered an injury from the sport. He later graduated from this college in 1981 with a bachelor’s degree in economics.

Roger Goodell’s first professional job after graduating from college was working for the National Football League as an intern. He worked here for several years during the 1980’s. Luckily for Goodell, he was promoted in 1987, to the position of assistant to the president of the American Football Conference. He continued to work in this position for the remainder of the decade.

In 1990, Roger Goodell was promoted again, this time to the position of director of international development and club administration. He stayed in this position for the entire decade.

Roger Goodell was promoted again in 2001 to the position of executive vice president, as well as taking on the role of chief operating officer. He only stayed in these positions for a few years, as he was promoted to the role of the commissioner in 2006. This is the career that he is currently most famous for.

Roger Goodell started to make changes almost immediately, once he was in the position of commissioner. One of the first things he did was make a personal conduct policy. This was put into effect because too many NFL players were getting arrested or otherwise scorned for their less-than-polite conduct either on or off the football field. This policy went smoothly at first, but over time, fans and football players started to criticise the policy. This was because some people thought some punishments were too harsh, while at other times they were not harsh enough.

One of the other things he did was try to make the game safer. Many football players suffer from concussions when playing the game, and while it does not usually lead to death, it can cause problems for a player later in life, even if they are retired from playing football. Several former football players took the NFL to court to sue for money for the complications that game-related concussions left in their life. Many of these players won court battles. When all was said and done, the NFL lost more than $500 million to these retired players.

In 2017, Roger Goodell signed a five-year contract to stay with the NFL as its commissioner. Even though some players and fans of the game were not fans of his, he was proving to make the NFL enough money to keep him on board.

Goodell’s most recent bit of scandal was in February 2018 when he mentioned wanting to sue Jerry Jones, the owner of the Dallas Cowboys. He wanted to sue him because he wanted to more or less punish him for defending Ezekiel Elliott, a football player charged with domestic assault. He also wanted to teach other football team owners a lesson so that they wouldn’t defend other abusive or criminal football players.

Roger Goodell puts the money he earns from the NFL to good use. He is a member of the BigBrothers Big Sister board. He is also on the board of the Lawrence Hospital, located in Bronxville, New York, USA.

Roger Goodell married Jane Skinner in 1997. This couple has two children together.