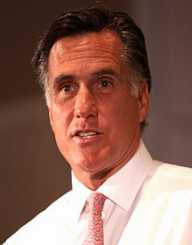 American politician Mitt Romney was born on the 12 March 1947 in Michigan to Lenore and George Romney. The family lived in Bloomfield Hills, Michigan.

His father George was a successful auto executive who was also the 43rd Governor of Michigan from January 1963 to January 1969. Romney’s mother Lenore was a former actress and politician who was the Republican Party nominee from Michigan for the US Senate in 1970.

Mitt Romney was a student at Cranbrook School in Detroit, graduating in 1965. He enrolled at Stanford University but left in 1966 but left to do missionary work with the Church of Jesus Christ of Latter-day Saints in France. He returned home and began his studies at Brigham Young University, receiving a BA degree in 1971. Afterward, he entered Harvard Law School and Harvard Business School where obtained a law as well as a masters degree in business administration in 1975. He graduated in the top five percent of his year.

Working in the management consulting industry, Mitt Romney joined Bain & Company. He became their chief executive officer and in 1984, helped found Bain Capital a private equity investment firm. He was extremely successful, and his net worth is estimated to be in the region of $250 million. This enabled him to finance his political campaigns.

Mitt Romney ran for a seat in Massachusetts in 1994 but lost to Ted Kennedy. He returned to his position at Bain Capital. In 1999 he was appointed the president of the Salt Lake Organising Committee to oversee the 2002 Olympic Games. This brought him to public attention when he successfully turned the committee around. He was then elected Governor of Massachusetts (2003-2007). Achievements as governor were health-care reform and budget deficit reduction.

Mitt Romney has received numerous honorary doctorates and awards. The Cranbrook School presented him with a Distinguished Alumni Medal (2005) and in 2012 Time listed him as one of the ten most influential people in the world.

Mitt Romney is an author and has published some books including No Apology: The Case for American Greatness (2010).

The Romney family are practicing Mormons, and Mitt Romney has served in various leadership roles within The Church of Jesus Christ of Latter-day Saints in his area.

Mitt Romney gave a speech in March 2016 at the Hinckley Institute of Politics at the University of Utah which strongly criticised Donald Trump and offered advice on tactics to ensure that Trump did not win the Republican Nomination.