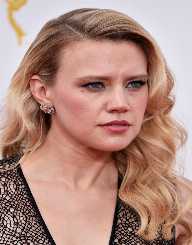 Kate McKinnon is an actress, starring in all-female Ghostbusters reboot.

Kathryn McKinnon Berthold was born on 6th of January 1984 to Michael Thomas Berthold and Laura Campbell. She was born in Long Island town of Sea Cliff, New York, and has a younger sister named Emily.

The sisters were raised in Sea Cliff, their father Michael died when she was eighteen.

Kate McKinnon graduated from North Shore High School in 2002 and attended Columbia University as a theatre major. During her time in Columbia, she co-founded Tea Party, a musical improv comedy group.

She was a member of Prangstgrüp, a prank group that set up and recorded elaborate pranks in college. Kate starred in two Varsity Shows and later graduated in 2006.

Kate McKinnon could also play the cello, guitar, and the piano, as well as perform dance recitals and plays.

Kate McKinnon joined Logo TV's The Big Gay Sketch Show in 2007; she was in seasons one to three, playing Fitzwilliam. Kate’s character was a British teenage boy, who was desperate for a vagina.

Her success in the show got her to perform sketch comedy live, at the Upright Citizens Brigade Theatre in New York during 2008, where she was noticed.

Kate McKinnon also voiced characters in The Venture Bros, Robotomy and Ugly Americans. She landed a role as Jillian Holtzmann in Ghostbusters all-female remake in 2016.

She was also starring in Lunch Witch and as Ms. Frizzle in Magic School Bus series. Kate will appear as Pippa in Rough Night in 2017.

In 2016, Kate McKinnon debuted on NBC’s Saturday Night Live, and she was promoted to repertory status soon after. She played a lot of roles on SNL, most famous impressions include Ellen DeGeneres,

Shakira and many more. Hillary Clinton appeared alongside her at the start of the 41st season, during the election campaign. Kate made the sketch of Hillary Clinton, whom she admires. In total, Kate McKinnon made forty-eight celebrity impressions for SNL, and more than four hundred sketches.

Kate McKinnon co-created and also starred in Notary Publix, alongside her sister Emily Lynne. Notary Publix is a web series.

Kate works for Ford Focus commercials during 2015. She also co-hosted with Kumail Nanjiani for the thirty- first Independent Spirit Awards.

Kate also does voiceovers in The Simpsons and Family Guy. She was Stan’s Fish Wife in Finding Dory Animation, and the birthday mom in Angry Birds movie. Kate does around nineteen short films, voices and appearances in films.

Kate McKinnon won PrimeTime Emmy in 2016, for Best Supporting Actress in Comedy, and for Outstanding Original Music and Lyrics.

Kate McKinnon is the first openly lesbian cast member for SNL. She is in a relationship with Marla Mindelle, a fellow actress.

Both girls started the band Indigo Squirrels in 2015, but the band only had one concert performance.

Kate McKinnon also chooses not to be on social media platform, citing that she will misrepresent her true feelings.