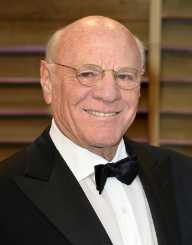 Barry Diller is an American business entrepreneur and media mogul who has amassed a great fortune by establishing networks that soon boomed in business. He also made investments to other companies, furthering his ventures.

Diller is married to Diane von Fürstenberg, former Princess of Belgium turned-fashion designer. She is the mother of Alexandre Egin and Tatiana Desireé from her marriage to Prince Egon von Fürstenberg, a German aristocrat. Diller tied the knot with Fürstenberg in 2001.

Barry Diller was born in San Francisco, California on February 2, 1942, to Reva and Michael Diller, both of Jewish origins. As a high school student, Diller rarely attended class even in college where he was enrolled in UCLA where he dropped altogether after a single semester.

Despite not having any college degree, Diller was able to land a job with the help of a family friend, Marlo Thomas. Diller was employed in William Morris Agency's mailroom and worked his way up. A few years later, he became a talent agent and by 1996, he was recruited by ABC as a programming assistant and rose up in ranks to become the network's vice president.

He also worked as film giant Paramount Studio's Chief Executive and Chairman. Under Diller, the studio managed to release hit films such as the 1977 disco-hit Saturday Night Fever and the action-packed adventure Raiders of the Lost Ark in 1981.

The Founding Of Fox Network

By 1984, Diller joined hands with Twentieth-Century Fox to form one of the biggest TV networks of today, the Fox Television network. Under Diller, the network produced shows such as The Simpsons and Married... with Children which turned out to be a commercial success. However, he resigned from the position in 1992 after working in the network for almost 8 years from clashing with Rupert Murdoch, one of Fox's parent company.

Upon resigning from Fox, he bought a $25 million share on QVC, a shopping channel the same year in 1992. He also attempted to buy Paramount Communications but lost the bid to Viacom. 3 years later in 1995, he relinquished QVC. The same year, he became the chairman of the Home Shopping Network and also bought the Sci-Fi Channel.

Come 1997, Diller found a new business venture by becoming co-owner of Ticketmaster and a year later, he merged its online arm with Citysearch. Citysearch provides online city guides locally which transformed Ticketmaster into an e-commerce deal which was later renamed as Ticketmaster Online-Citysearch which launched in 1999.