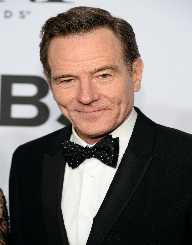 Bryan Cranston was born on March 7th, 1956. He is famous for being an American actor particularly in roles such as Hal in the sitcom dubbed Malcolm in the Middle, Walter White in the high acclaimed series Breaking Bad. It is from the film series Breaking Bad that Cranston rose to the limelight.

Aside from his role as an actor, he has also earned his fame for being a director and a screenwriter.

Bryan Cranston was born on March 7th, 1956. His place of birth was in Hollywood, California. He was the second born child to Annalisa; who was famous for being a radio actress. His father was called Joseph Louis Cranston.

His older brother is called Kyle while his younger sister is Amy. Cranston drew his acting inspiration from his father who also dreamt of hitting the big screen one day. Nonetheless, his father’s acting career did not prosper as he did not land enough roles capable of putting food on the table. Owing to his failure, Cranston’s father walked away from them when Cranston was only eleven years old.

After graduating from college, Bryan Cranston did not harbor his dreams of one day becoming a professional actor. Regarding acting, he took on anything that came his way. For that reason, he took on small roles on shows such as She Wrote, Murder and Airwolf.

The small roles helped Cranston bud his career as by late 90s; he had gained roles in recurring shows such as King of Queens and Seinfeld.

In 1998, Bryan Cranston took the role of Buzz Aldrin in the miniseries dubbed From the Earth to the Moon – 1998. Similarly, during the same year, he landed himself a role in Saving.

Two years later, Bryan Cranston's career took a different turn as he landed himself an important role in Malcolm in the Middle. He was to feature as Hal; the father of the five boys featured in the sitcom.

His role brought him to the limelight as he earned himself three Emmy Award nominations for supporting actor.

Bryan Cranston's big break came in 2006, shortly after the sitcom Malcolm in the Middle came to an end. In the midst of looking for something to work on, Vince Gilligan gave him the Breaking Bad TV series script. Gilligan, the creator of Breaking Bad, had initially crossed paths with Cranston back in 1998 while working on the hit show TheX Files. Gilligan saw that Bryan Cranston would best fit for the role of the main character of the show; Walter White.

This was a high school teacher that had been diagnosed to have cancer. To save his family from poverty, the teacher opts to cook meth to guarantee his family with financial security that they crave for.

Breaking Bad debuted in 2008, and it was a significant hit. It landed Bryan Cranston to the epitome of his acting career. He won himself three consecutive Emmy Awards for his lead role in the hit show.

Later on, Bryan Cranston also bagged home another Emmy Award in 2014 when the show came to an end.

Later, in 2015, Bryan Cranston hit the headlines again for his screenwriting role in the biopic dubbed Trumbo. His role landed him an academy award nomination.

Bryan Cranston first wedded Mickey Middleton in 1977. The two lived together until 1982 when they went separate ways. Seven years later, he tied the knot for the second time with Robin Dearden. The two were blessed with one daughter in 1993. Their daughter is named Taylor Dearden.