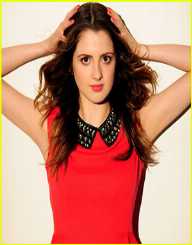 Laura Marano is an American singer and actress. Laura was born on November 29, 1995, in California. Laura Marano star started shining when she starred in Austin & Ally, a Disney Channel Series production, as Ally Dawson. Marano started acting when she was young. At age five, she performed in "Stage Door Theatre." The environment at home influenced her acting career since her mother as well as her elder sister, Vanessa Marano, was also an actress who stars in Freeform's Switched at Birth.

Laura Marano's acting career has grown in tremendously having starred in numerous films including "Without a Trace" for three seasons, "Back to You" and "Bad Hair Day," an original movie of Disney Channel. Laura Marano signed with Big Machine Records and produced her first single" Boombox" in March 2016.

Laura Marano is a daughter of Professor Damiano Marano and Ellen Marano, a former actress. Laura was born and raised in Los Angeles, California.Laura Marano grew around people who were passionate about acting. Her mother owned Agoura Children's Theatre. Her elder sister, Vanessa Marano also had a lot of interest in acting. Laura was introduced to acting by her mother. She would go with Lura to her theatre. As a result, Laura learned the skills and grew to become a great American actor. Laura Marano and her sister started showing interest in acting professionally while they were young. At age 5, Laura had already expressed her interest to her parents. Initially, her mother was reluctant since she thought that the industry was too tough for her daughters.

Laura Marano's mother devised a way to discourage Laura and her sister from pursuing acting. She enrolled them at one of the most difficult talent agents, Abrams Talent Agency. She hoped the strict agency would harass her daughters, reject them and eventually discourage them from acting. Her intentions backfired when both Laura and Vanessa were accepted into the organization. Laura's career set off from the agency and has been on the rise. Laura Marano attended a regular school while she was acting.

Laura Marano started acting when she was five years old, she worked with Stage Door Theatre and produced multiple productions.Laura did memorable commercials including with small appearances at "Joan of Arcadia," "Ghost Whisperer," "Huff "and "Medical Investigation." Laura Marano's most significant breakthrough came she acted in "Without a Trace." Laura played a child role in the film "The Jacket" where she starred as Keira Knightley. Laura regularly appeared on the Fox game show "Are You Smarter Than a 5th Grader?" She has appeared in "Back to You," "The Sarah Silverman Program" and "Batteries," the child's version of Sarah Silverman Program.

Laura Marano starred as Ally Dawson on one of the Disney Channel series, Austin &Ally, in 2011. After two years, Laura activated her singing career by producing four solo songs including "Me and You," Redial" and a duet with Ross Lynch for "Turn It Up," a soundtrack album for Austin &Ally. The songs performed very well and even appeared on the top songs on the chart. Laura Marano's collaboration with her friend and fellow actress at Disney Channel saw them release a Christmas single song "I Love Christmas" in a compilation of the album "Holidays Unwrapped." The song started off at position fifty in America's Billboard Holiday Digital Songs. Chart.

In 2014, Laura Marano appeared in several films including "Fish Hooks" as Hammu, "Liv and Maddie" as Fangs. In 2015, Laura signed with Big Machine Records. In the same year, Laura Marano starred in "Bad Hair Day" in Disney Channel. Laura also starred in "A Sort of Homecoming," a young version of Amy. In 2016 Laura Marano started her talk show on Radio Disney called "For the Record with Laura Marano." She used the platform to encourage young artists through her experiences in the acting and singing career.Laura also hosted several guest stars including Ariana Grande, Nick Jonas, Meghan Trainor and Trove Sivan. The first episode aired on January 12, 2016.

On March 11, 2016, Laura Marano released her first single "Boombox" which was widely accepted by the fans. The video of the song was released in April the same year. It boasts of over six million views in just one week. It has over forty-two million views at the moment. Laura Marano performed the song on different platforms including "2016 Radio Disney Music Awards" and "Today."

Laura Marano has a sister called Vanessa Marano who she loves and looks up to her for guidance in the career. The family lives in Los Angeles, California. Laura's mother owns a children's academy which helped influence her daughters to pursue the career. Laura Marano loves pets. She has a dog named Velvet.Laura is also a go-getter. Despite her tight schedule, Laura has registered at the University of Southern California as a part-time studentLaura Marano firmly believes in education and its ability to unlock doors even in her career. Laura intends to further her education as she continues with her career.

Laura Marano has selected the 2013 UNICEF's Trick-or-Treat for UNICEF Ambassador Laura Marano encouraged young people to devise ways of raising money in Halloween to assist children worldwide. Laura expressed her joy and pride to be involved in the mission to help the less fortunate.

Laura Marano was named the ambassador for Disney and Birds Eye Vegetable Campaign "Step up to the Plate" in August 2014. The campaign aimed at encouraging children to embrace healthy meals and vegetables.