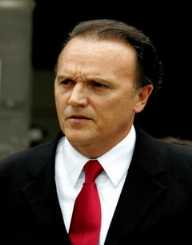 Richard Scrushy was the founder of the American health care services company HealthSouth. He was convicted of corruption charges and jailed.

Richard Marin Scrushy was born in Selma, Alabama in August 1952. He grew up in Selma in a middle-class family. His father worked as a cash register mechanic, while his mother was a nurse. He enrolled at the Parrish High School. Scrushy dropped out of school before completing his education at the age of 17 years.

He married his first wife and started living in movable trailers in Selma. He did manual jobs to fend for his family. He returned to school and completed his high school. He enlisted for studies at Wallace State College He studied respiratory therapy at the behest of his mother. After his initial year, he transferred to study at Jefferson State Community college. He furthered his education by joining the University of Alabama. He lectured respiratory science at the university for 30 months. He left the teaching job at the university for another one at Wallace State College.

He left the teaching profession and went into healthcare. He became an employer of Lifemark Corporation in Houston Texas. The company dealt with pharmaceutical products, physical rehabilitation of patients, and the placement of patients in hospitals. He relocated to St. Louis and became the regional head of the company’s respiratory therapy department. He was promoted to the post of Chief Operating Officer of Lifemark and moved to his office in Houston.

In order to improve the services of the company, Scrushy created a new product. He had a plan for the creation of outpatient and rehabilitative health care clinics across the US. He presented his plan to the management of the company. Due to the ongoing merger negotiations with another firm, Lifemark management rejected the plan.

Scrushy resigned from the company and formed Amcare in 1983. He implemented his plan of a chain of outpatient clinics. He opened the first clinic in Little Rock, Arkansas. He partnered with other investors to gradually lift the company into operational expansion. In 1984, he transformed the company into HealthSouth. Scrushy registered the entity as a public trading company in 1986. In 1987 he expanded the company into two other ventures.

Scrushy expanded his company to other parts of the globe. It opened facilities in Latin America, Europe, and Australia. HealthSouth had a headcount of 50,000 medical physicians, with 2,000 health facilities. The facilities recorded over 120,000 patients on a daily basis. In 1997 Scrushy broke into the top three highest-paid CEOs in the US, heading a company worth USD 106 million.

In February 2003 the FBI opened an investigations file against Scrushy and HealthSouth. In November 2003 Scrushy was charged in court for fraud. He was acquitted of the charges in July 2005 in a Birmingham court.

He continued battling another court case in Montgomery. On October 26, 2005, Scrushy was found guilty of 30 counts of fraud. They included fraud through extortion, racketeering, money laundering and obstruction of justice through intimidation and bribery. He was put under probation awaiting sentencing. He violated his probation conditions and was put in under house arrest. Scrushy was fitted with a tracking device to monitor his movements in and out of his house.

On June 28, 2007, he was sentenced to federal prison for 78 months. He was ordered to pay USD 267, 000 in compensation, and affine of USD 150,000. He was also ordered to work in a community program, three years’ probation and extremely good behavior during the period.

In May 2009 junior staff of his company sued Scrushy for civil damages. He found culpable of the proceedings and ordered to compensate them. Scrushy paid his former employees a total of USD 2.87 billion in civil damages after his appeal was declined.

Scrushy got married three times. He first married Debbie Cody after dropping out of high school. they later divorced. He married Karon Brooks from 1978 to 1996. Scrushy remarried his current wife Leslie Anne Jones in 1997.

Richard Scrushy was released from federal custody systematically. He was transferred from the prison in Texas, to a lesser security facility in San Antonio. In line with the court order, Scrushy was put under a guarded house outside the correctional facility. He continued doing his community service during his stay at the house. On July 25, 2012, he was freed from prison.