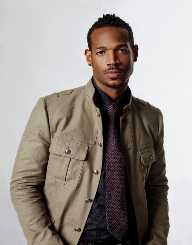 Actor, comedian, and writer Marlon Wayans was born in New York City on July 23, 1972, to Howell Wayans and Elvira Green. He comes from a talented family, and a number of his siblings have succeeded as film directors, screenwriters, comedians, and actors.

Marlon Wayans appeared in the television sitcom The Wayans Bros with his brother Shawn (1995-1999). The show was set around two brothers living in an apartment in Harlem.

Marlon and Shawn Wayans worked together on the first two films of the Scary Movie franchise. Scary Movie (2000) was about a group of teenagers being stalked by a serial killer. Scary Movie 2 (2001) reprised the characters and continued the theme. Shawn and Marlon Wayans wrote, produced and starred in White Chicks (2004). The film was about two African American FBI agents who disguise themselves as white women. He appeared in Behind The Smile (2006) playing Danny Styles, a young comic who made it in LA but had difficulty coping with fame. Damian Wayans directed the film. He also did the voiceover in Marmaduke (2010) and worked on various other television and film projects including a guest appearance on Second Generation Wayans (2013). He also starred the parody comedy A Haunted House in 2013 and its sequel, A Haunted House 2 in 2014.

Recent work includes playing himself in Hollywood Game Night (2016), starring as Christian Black in Fifty Shades of Black (2017), which is written and produced and starred as Rob Anderson in Naked (2017). Wayans co-wrote the script of Naked with Rick Alvarez and Cory Koller. The film is a remake of a Naken, a Swedish film.

Marlon Wayans shared a BET Comedy Award Outstanding Writing for a Box Office Movie for White Chicks (2004). He also shared a 2012 TV Land Awards: Groundbreaking Show award for In Living Color (1990). He has also been nominated for some other awards.

Marlon Wayans and Angelica Zachary got married in 2005, and they have two children.

His family followed the Jehovah's Witnesses.

Charities Marlon Wayans has supported including the Get Schooled Foundation, Keep A Child Alive, the Los Angeles Police Memorial Foundation, the Multiple Sclerosis Society and the Vine Group.