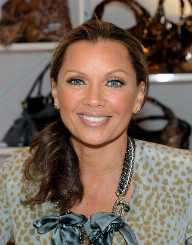 American actress and singer Vanessa Williams was born on the 18 March 1963 in The Bronx, New York City. Her parents, Milton and Helen Williams, were music teachers.

As a twenty-year-old college student, Vanessa Williams became the first African American to win the Miss America pageant on the 17 September 1983. She had to resign as Miss America after Penthouse magazine obtained and published nude photographs taken of her when as a first-year student she was working for photographer Tom Chiapel as his receptionist. Vanessa Williams sued Penthouse for millions of dollars but later decided to drop the case and concentrate on her career.

Another controversial issue that brought Vanessa Williams to national attention was that sections of the African American community objected to the fact that in their eyes blue-eyed Williams did not look black enough. (Dr. Alvin Poussaint, Associate Professor of Psychiatry, Harvard Medical School).

Vanessa Williams went on to have a successful career as a singer and actress. She has recorded seven albums and starred in film and on television.

Her debut album The Right Stuff (1988) was a success, and the single Dreamin became her first top 10 hit on the Billboard Hot 100. The single also found success on the R&B/Hip-Hop Songs chart, reaching number one and winning three Grammy Awards nominations and a NAACP Image Award. The Comfort Zone, her second album was an even bigger success with the single Running Back to You reaching the top twenty of the Hot 100. Save the Best for Last reached number one in the United States and topped the charts for five weeks. The song also reached number one in Australia, Canada, and the Netherlands and was in the top five in Ireland, the United Kingdom, and Japan. The Comfort Zone won Vanessa Williams five Grammy Award nominations, and the album was certified triple platinum in the US, platinum in the United Kingdom and gold in Canada. Her eighth studio album, The Real Thing, was released in June 2009.

Vanessa Williams was a celebrity judge at the Miss America pageant in September 2015 where she was given an apology for the way she was treated in 1984 over the publication of the unauthorized photographs.