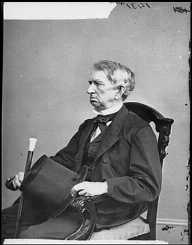 William Henry Seward was a United States politician who served as the Secretary of State from 1861 to 1869. Born on May 16, 1801, he also served as the governor of New York and as a US senator. Seward started a career as a lawyer before delving into politics when he contested as an Anti-Mason and won election to the New York State Senate in 1830 serving for four years.

William Henry also served two terms as governor of New York from 1838 to 1842. As a governor, he signed several laws that provided black residents with some form of rights and opportunities. In 1949, he was elected to the US Senate where he continued his anti-slavery campaign. He served in the Senate for two terms until 1860.

William Seward's anti-slavery posture brought him enmity within the South, who were proponents of slavery. It also killed his presidential ambition. Seward became the Secretary of State under Abraham Lincoln’s administration and later under Andrew Johnson.

William Seward was born on May 16, 1801, in Florida, New York as the fourth son of Mary Jennings and Samuel Sweezy Seward. His father was a wealthy landowner, slaveholder, and active in local politics. Seward was an intelligent child who preferred running away from home to school than from school to home.

William Seward received education at Farmer’s Hall Academy and continued at the UnionCollege in Schenectady in New York. He later left school and travelled to Georgia missing out of graduation when he returned to New York in 1819. It was during his stay in Georgia that grew strong antislavery sentiments.

Back in New York, he studied law for some time before returning to Union College where he graduated with a degree in 1820. Graduating from college, Seward studied law in Goshen and New York under attorneys like Ogden Hoffman, John Anthon, and John Duer for two years.

In 1822, William Seward passed his bar exams and was admitted to the bar. Seward started his law practice in Auburn in the Cayuga County joining the practice of retired judge Elijah Miller.

While practising law, William Seward also ventured into politics by joining the Anti-Masonic Party. In 1830, Seward won elections into the New York state Senate and sworn into office in January 1831 serving for one term. In 1838, on the ticket of the Whig Party, Seward was elected the governor of New York. Sworn into office on January 1, 1839, Seward encouraged immigration into New York to enhance development, but lack of cooperation from the Democrats made him unable to implement much of his agenda during his first term in office.

Throughout his term of office, William Seward championed the right of slaves. In 1840, the New York legislature passed some acts to protect African American from Southern slave-catchers. Seward was re-elected in 1840 for a second term in office.

After his governorship, William Seward left mainstream politics for a while to concentrate on his law practice. He, however, returned to contest for a seat in the US Senate and was successful.

On March 5, 1849, William Seward was sworn in as a senator from New York to the US Senate. He served for two terms in office until 1860. Before his second term, the Whig Party and the new Republican Party had merged into one. While at the US Senate, he continued his anti-slavery sentiments and opposed several acts and laws that sought to expand slavery.

His main contender Abraham Lincoln defeated him for the Republican presidential bid and subsequently he won the presidential elections to become the President of the United States. President Lincoln appointed William Seward as Secretary of State. On April 14, 1865, Lewis Powel attacked Steward stabbing him five times in the face and neck.

Powell was part of a conspiracy to hatch by John Wilkes Booth to kill President Lincoln and his vice Johnson. Booth on the other hand fatally attacked Lincoln. William Seward continued to serve as secretary of state after Johnson took office.