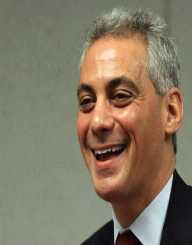 Rahm Israel Emanuel was born 29th November 1959, to Benjamin and Marsha Emanuel. He was born in Chicago, Illinois, in the United States. His father was a pediatrician, and his mother, a homemaker. He had two brothers, one older, one younger, and a younger adopted sister.

Rahm Emanuel studied at New Trier High School, and he also learned ballet with his mother’s encouragement. He enrolled at Sarah Lawrence College and graduated in 1981 with his degree in Liberal Arts. He then attended Northwestern University and graduated in 1985 with his master’s in Speech and Communication.

When Rahm Emanuel decided on a political career, Emanuel got his first role with Illinois Public Action, which worked on consumer rights.

Emanuel took on different roles as he became more involved with politics for the Democratic Party. His work included helping on campaigns for the U.S. Senate, a U.S. presidential campaign for Bill Clinton, and fundraising for a candidate running for mayor of Chicago.

During his campaign management for Bill Clinton, Emanuel was concurrently paid a retainer by Goldman Sachs, an investment bank. After Clinton became President of the United States, in 1993, Emanuel took on the role of senior advisor. He held the position until 1998.

Rahm Emanuel left the White House in 1998 and moved into the financial sector. He went to work for Wasserstein Perella, an investment bank and was with them for two and a half years. During that period, he served as their managing director of the Chicago office.

In 2000, Clinton appointed Emanuel to the Board of Directors, for Freddie Mac. Over the next 12 months the bank was embroiled in several scandals, and in 2001, Emanuel resigned – not because of the scandals, but because he was going back into politics.

Rahm Emanuel successfully won a seat in the U.S. House of Representatives in 2002. He was re-elected in the following two elections and held the position until 2009.

When Barack Obama became President in 2008, Rahm Emanuel joined him as his White House Chief of Staff. He was influential in the position over the next two years, but he left the role in September 2010 to run for mayor of Chicago.

Emanuel was successful in his campaign and became Mayor of Chicago in May 2011. He was re-elected in 2015.

His goals were to adopt marriage rights for same-sex couples, to help pensioners, and to build a casino in Chicago. He also ran into a lot of controversies, including police shootings, and the initial unsuccessful contract negotiations with the Chicago Teachers Union (CTU).

During his second term in office, due to various controversies, Emanuel’s popularity rating fell well below what it had been and didn’t recover. All though still in office, he has indicated he will not seek a third term in 2019.

Emanuel has released two publications. The first, The Plan: Big Ideas for America was published in 2006. The second, Chicago 2011 Transition Plan, was released in 2011.