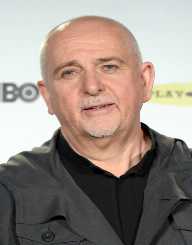 Peter Gabriel was born on February 13th, 1950. He is an English singer and songwriter. In addition to his music career, he is also a humanitarian activist. He rose to fame after forming his rock group called Genesis. His major success came about when he decided to go solo in 1975. It is through his solo career that he came up with the album So.

This album featured one of his all-time hit songs, “Sledgehammer.” Other songs that had good reception within the album were “In Your Eyes” and “Big Time.” Later, he also released his albums Us and Up in 1992 and 2002 respectively. Gabriel is among the co-founders of Real World Records and WOMAD Foundation.

Peter Gabriel was born in 1950 and his parents were Ralph Parton and Edith Irene Allen. His place of birth was in Chobham, Surrey, England. Gabriel’s mother played an important role in teaching him to play the piano while he was still young. Parton, his father, majorly indulged in the world of engineering. Gabriel went to a private primary school named Cable House. After this he went to St. Andrews prep school located in Horsell and later to Charterhouse School.

While schooling in Charterhouse, he explored his love for music and came up with the band Garden Wall. He brought three members on board, Tony Banks, Anthony Philips, and Mike Rutherford. They were going to be the keyboard player, guitarist, and bassist respectively.

With the members of the band from Charterhouse School, Peter Gabriel went ahead and formed the Genesis band in 1967. A year later after forming the group, they began to release their first single song, “The Silent Sun.” In 1969, they released their first album, From Genesis to Revelation. This album did not perform well.

Nonetheless, with their dedication their second album, Trespass performed better. The early 70s, the band had gained a right audience, and with their album Nursery Cryme, they were hitting top 40 in the U.K. chart. During this time they had a new drummer in the group, Phil Collins.

Things got better and better as their next album release in 1972; Foxtrot got them to number 12 in chart rankings. In 1973, they released Selling England by the Pound. As a result, they received their best performance ever as a band. This album was listed as number 3 in England.

The coming years were a success for Peter Gabriel and his group. However, tensions began to arise as he engaged in extracurricular activities. The band was not used to this as they felt jealous considering the fact that he worked with William Friedkin, a director, in another personal project. Sooner than later, Gabriel left the band after releasing the last album with the band in 1974.

Going solo, Peter Gabriel did even much better as compared to the time when he worked with the band. The first solo album he released featured the song "Solsbury Hill." This song was a major hit as it made to U.K. top 10 while grossing at top 40 in the U.S. Following his first success while going solo, it did not take time before Gabriel released his third album in 1980.

The album he released during this period was a major achievement in Gabriel’s career. Some of the songs featured in this album included “Games Without Frontiers.” This song was a major hit as it not only made it to U.S. top 40 but it was also ranked 5th in Britain. As part of his success, Gabriel also helped in establishing the World of Music, Arts and Dance - WOMAD.

Peter Gabriel’s significant achievement also came through after releasing his 5th album named So. This was in 1986. It was ranked top in the U.K. and was ranked second best in the U.S. “Sledgehammer” was Gabriel’s first ever top-ranked song.

Peter Gabriel’s first marriage was to Jill Moore. They divorced in 1987. They had two daughters while married together. In 2002, he got married to Meabh Flynn. This couple had two sons Luc and Isaac Ralph.