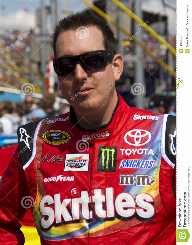 Racing To the Pages of Record Book: Kyle Busch

Acclaimed American professional stock car racing driver and owner of Kyle Busch Motorsports, Kyle Thomas Busch was born on May 2, 1985, in Las Vegas, Nevada, United States of America. He is the second child of Tom and Gaye Busch. His elder brother Kurt Busch is also a well-known racing car driver famous for winning the 2004 NASCAR Nextel Cup Series. Both the brothers worked in the garage owned by their father during their childhood. At the age of 10, Kyle became the crew chief of his brother’s dwarf car team. Kyle’s mother wanted him to become a dentist.

However, Kyle was passionate about pursuing a career in Motorsports since his childhood. He started car racing at the age of 13 and launched his driving career by participating in the Legends Series of car racing in 1998 soon after completing his 13th birthday. He went on to win as many as 65 races in the Legends Car racing between 1999 and 2001 including two track championships at the Las Vegas Motor Speedway Bullring short-track. In 2002, he graduated from the Durango High School with honours.

Kyle Busch moved to Late Models competition and won ten championships at the bullring during the 2001 season. At age 16, he started competing in the NASCAR Craftsman Truck Series after signing with Roush Racing. He drove No. 99 Ford for Roush Racing and participated in his debut race at Indianapolis Raceway Park. He finished at No.9 position in his first race in the series. Unfortunately, his truck ran out of fuel with another 12 laps to cover in the second race of the season at Chicago Motor Speedway. He was leading the race at that time.

In 2003, he joined the Roush Racing rival Hendrick Motorsport as a development driver. Kyle competed in seven ARCA RE/MAX Series race for Hendrick Motorsports with two consecutive wins in April and May at Nashville Superspeedway and  Kentucky Speedway respectively. In the same year, Kyle reached the age of 18 and returned to resume his NASCAR career.

Earlier, Kyle Busch was forced to switch over from NASCAR to the American Speed Association (ASA) National Tour due to the imposition of age restriction by the NASCAR authorities for participation. He participated in seven Busch Series races driving the No. 87 Chevrolet for NEMCO Motorsports. Out of the seven races, he finished at the second position in two races including his debut at Lowe's Motor Speedway and also at Darlington Raceway.

Kyle Busch started his 2004 season with an auspicious win in the ARCA Re/MAX Series 200-mile race at Daytona International Speedway. He also started his first full-time Busch Series season in this year. In the fourth race of the year at Darlington Raceway, he finished at the top creating his first pole position in his still nascent career. His first career win in the series also came in the same year when he won at the Richmond International Raceway. He went on to win four more races in his debut season and leveled with Greg Biffle for most wins by a driver in their rookie year. He also finished second, trailing series champion Martin Truex, Jr. by the respective points scored by them.

The management of Hendrick Motorsports, on October 2004, declared that Kyle would compete full time in the Sprint Cup Series for them in the 2005 season. In a surprise move, Hendrick Motorsport owner Rick Hendrick put Kyle in the # 5 Chevy in place of the NASCAR legend and two-time Cup champion Terry Labonte. In September 2005, he won his first career Sprint Cup race at California Speedway thus becoming the youngest ever participant to win the title in the history of the series.

Kyle Busch became the first Nextel Cup Series driver to win in the Car of Tomorrow in 2007. Kyle left Hendrick Motorsports after his contract was not renewed for the 2008 season and he joined the Joe Gibbs Racing for the upcoming season. He finished at the fourth position in the 50th Daytona 500 after leading the most laps while representing Joe Gibbs Racing. He leads the series point chart for the first time in his career after another fourth-place finish at Auto Club Speedway.

Kyle participated in several competitions and became victorious in many of them. He again returned to NASCAR in 2015. In 2010, he set a new record of most wins in a single season by winning 13 races in that season, which is a record. He also founded Kyle Busch Motorsports in 2009.

Kyle Busch married Samantha Sarcinella, a native of St. John, Indiana, on October 31, 2010, in Chicago. Samantha is a graduate of Purdue University with a psychology degree. They together have a son named Brexton Locke Busch, who was born on May 18, 2015.

He founded Kyle Busch Foundation in 2006 after visiting the St. John's Home in Grand Rapids, Michigan. The foundation caters to the needs of the underprivileged children of America.

In 2007, while competing In the Nextel All-Star Challenge at Lowe's Motor Speedway, Kyle and his elder brother Kurt got involved in an accident while pushing for their respective win. The incident had a bitter effect on both the brothers notably Kurt, who was not on speaking terms with his younger sibling for a while as a result of fallout after the accident. At the family Thanksgiving dinner that year, their grandmother talked to them and was the sole reason behind their reconciliation.